The findings indicate that over 80 percent of the metal pipe wall had worn away. 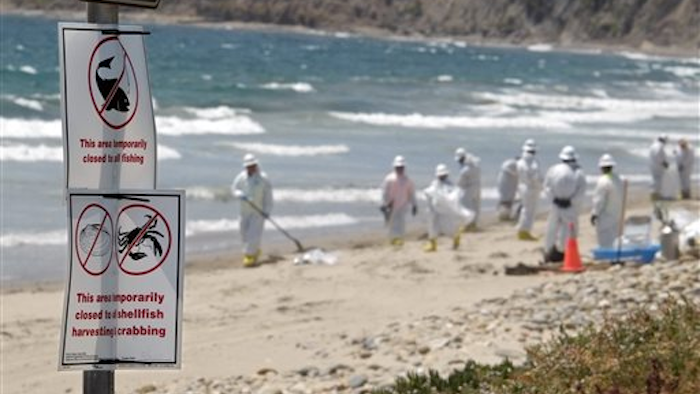 A pipeline rupture that spilled an estimated 101,000 gallons of crude oil near Santa Barbara last month occurred along a badly corroded section that had worn away to a fraction of an inch in thickness, federal regulators disclosed Wednesday.

The preliminary findings released by the federal Pipeline and Hazardous Materials Safety Administration point to a possible cause of the May 19 spill that blackened popular beaches and created a 9-mile slick in the Pacific Ocean.

The agency said investigators found that corrosion at the break site had degraded the pipe wall thickness to 1/16 of an inch, and that there was a 6-inch opening near the bottom of the pipe. Additionally, the report noted that the area that failed was close to three repairs that had been made to the pipeline because of corrosion after 2012 inspections.

The findings indicate that over 80 percent of the metal pipe wall had worn away over time because of corrosion, said Richard Kuprewicz, president of Accufacts Inc., which investigates pipeline incidents.

"There is pipe that can survive 80 percent wall loss. When you're over 80 percent, there isn't room for error at that level," said Kuprewicz, who cautioned that it's still too soon to determine what caused the pipe to fail.

The morning of the spill, operators in the company's Houston control center detected mechanical issues and shut down pumps on the line. The pumps were restarted about 20 minutes later and then failed, prompting another shutdown of the line.

Kuprewicz said restarting the pumps could have led to a rupture, or a break in the line could have caused the pumps to fail.

In either case, a hole that size would have leaked at a high rate — even with the pumps off — and may not have been quickly detected by remote operators.

The agency documents said findings by metallurgists who examined the pipe wall thickness at the break site conflicted with the results of inspections conducted on that area of pipe on May 5 for operator Plains All American Pipeline. Those inspections pinpointed a 45 percent loss of wall thickness in the area of the pipe break, meaning they concluded the pipe was in far better condition.

Investigators found "this thinning of the pipe wall is greater than the 45 percent metal loss which was indicated" by the recent Plains All American inspections.

The agency ordered the company to conduct additional research and possible repairs on the line, which has been shut down indefinitely.

Plains All American said in a regulatory filing that there is no timeline to restart the line, which runs along the coast north of Santa Barbara.

The agency also ordered restrictions on a second stretch of pipeline, which the company had shut down on May 19, restarted, then shut down again on Saturday.

That second line had similar insulation and welds to the line that spilled oil last month. It cannot be started until the company completes a series of steps, including testing.

The company said in a statement that it is committed to working with federal investigators "to understand the differences between these preliminary findings, to determine why the corrosion developed and to determine the cause of the incident."

"While there is visual evidence of external corrosion at the failure site, Plains will not know the true physical and chemical characteristics of the failure or the apparent corrosion until the ongoing investigation, including the metallurgical analysis, is completed," the statement said.

California's U.S. senators issued a statement last week calling the response to the spill insufficient and demanding the pipeline company explain what it did, and when, after firefighters discovered the leak from the company's underground 24-inch pipe.

Plains All American and its subsidiaries operate 17,800 miles of crude oil and natural gas pipelines across the country, according to federal regulators

The spill is also being investigated by federal, state and local prosecutors for possible violations of law.