New U.S. Ambassador to China Max Baucus embraced the increasingly intertwined relationship between the two countries, saying he would push for fair trade while urging Beijing to respect human rights. 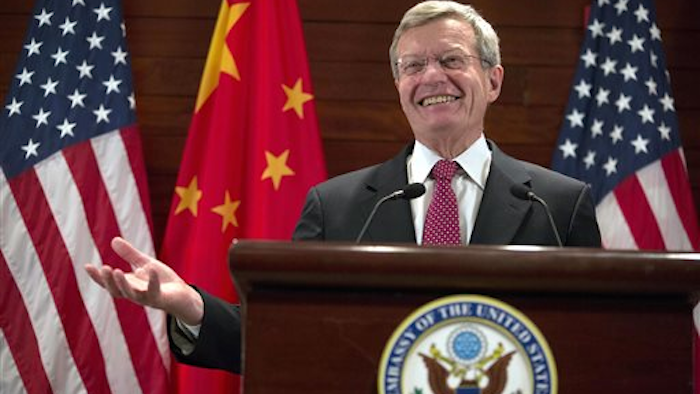 Meeting with journalists Tuesday less than 24 hours after arriving in Beijing, Baucus said the U.S.-China relationship is one of the world's most crucial.

"We simply must get it right," the former senator from Montana said.

Underscoring both the opportunities and barriers for U.S. businesses in the China market, Baucus said he wants to promote trade "in a way that is mutually beneficial and ensures a level playing field for American businesses and workers to compete fairly with their Chinese counterparts."

He said Washington wants to partner with China in tackling global challenges from cybersecurity to global warming, while also urging Beijing to "support the laws, norms, values and human rights that undergird the current international system from which we all benefit."

Baucus is taking over from former Washington Gov. Gary Locke, who in his last news conference as ambassador urged Beijing to respect the rights of peaceful political activists and said Washington is deeply concerned about the fate of a minority scholar charged with separatism.

Washington and Beijing have also traded barbs over the imprisonment of Nobel Peace Prize winner Liu Xiaobo on subversion charges and President Barack Obama's recent meeting with exiled Tibetan spiritual leader the Dalai Lama, who is reviled by China's government as a separatist.

China's authoritarian Communist government brooks no political opposition and is accused by the U.S. of routinely restricting free speech, freedom of religion and political expression.

However, many U.S. businesses are thriving in China's growing consumer market, while almost 220,000 Chinese are currently studying at American colleges and universities, the most from any country.