Thirty-five factories were closed or torn down in Pingshan county as part of the government's drive to clear up China's notoriously smoggy skies, but shutting plants has taken a human and economic toll in lost jobs and income. 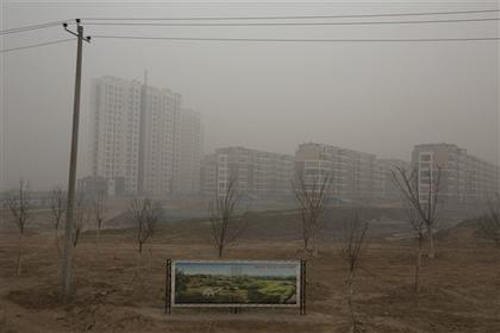 PINGSHAN COUNTY, China (AP) -- Huge chunks of concrete and broken machinery are all that is left of a cement plant that once spewed clouds of pollution over China's most polluted province, Hebei. Demolished in December, the factory was one of 35 closed or torn down in Pingshan county as part of the government's drive to clear up China's notoriously smoggy skies.

Combatting pollution has shot up the agenda of the ruling Communist Party, which for years pushed for rapid economic development with little concern about the environmental impact. Under public pressure to reduce the air pollution that blankets Beijing and cities across China, the country's leaders are rebalancing their priorities.

That was evident during this week's ceremonial National People's Congress. Premier Li Keqiang said Wednesday the government would "declare war" on pollution in the same way China had fought poverty. Smog, he said, was "nature's red-light warning against the model of inefficient and blind development."

The drive to clean up China's industry has added impetus to the government's campaign over the past several years to reduce excess production capacity in the polluting steel and cement industries.

But shutting plants has taken a human and economic toll in lost jobs and income. The demolition or closure of the 35 plants in Hebei's Pingshan county, about a four-hour drive southwest of Beijing, resulted in layoffs of 3,780 workers, according to state media reports.

"I do want the government to do something to improve the air quality. If the air gets better, it is good for everyone," said Guo Quanquan, 52, one of those laid off. "But my life has gotten worse after the closure."

He hasn't been able to find another job and now lives off the earnings of his two 20-something sons.

Another resident in Guo's village, Jia Shufang, said that most of its 200 households had depended directly or indirectly on the cement industry, with workers earning an average monthly wage of 3,000 yuan ($490). Former employees could work in restaurants or on farms raising pigs, cattle and poultry, she said, although "now most of them are sitting at home doing nothing."

For years, the central government has issued various environmental targets and pushed for industries to reduce excess capacity that had built up during China's years of booming growth, but they were resisted by local officials whose performances were judged more on their region's economic growth than the cleanliness of their skies.

Pressure has increased on local governments since September, when China's Cabinet released an action plan to control and prevent air pollution through 2017. Since then, more than half the country's provinces have released their own plans, including new restrictions on coal and heavy industry. The Cabinet also announced a $1.6 billion fund last month to reward the prevention and control of air pollution in key areas.

And in December, the party required local governments to revise the criteria used to evaluate their officials away from economic growth to their "overall work," including "ecological civilization." The quality of the environment is now among the main criteria used to assess officials' performances in Shijiazhuang city, which oversees Pingshan county, according to a report in the Hebei Daily in December.

"What's very important when assessing how likely it is for local officials to implement these policies is what are their incentives," said Brian Jackson, a China economist at IHS Economics. "This shows that the issue is being taken much more seriously even at the provincial level and they are adjusting their incentives accordingly to make sure that there is follow-through this round."

In Pingshan county, cement factories that had failed to meet national pollutant emissions standards had been targeted in the round of closures with the aim of reducing overcapacity and combating pollution, said Jia Taosha of Shijiazhuang's Development and Reform Commission. Shijiazhuang is one of seven Hebei cities that made it on to a recent environment ministry list of the top 10 most polluted cities in China.

The overall impact of these moves on China's economy is hard to judge at this point and no official estimates have been released.

"We may suffer slow economic growth in the short term, but this will work in upgrading the economic structure and result in a good living environment for our people, so it is worthwhile," the China Daily newspaper quoted Sun Ruibin, Shijiazhuang's Communist Party chief, as saying.

Across the city, the local government is organizing job fairs for thousands of laid-off workers and encouraging them to work in farming and food processing, according to its website.

Despite the plant closings in Pingshan, the air quality doesn't seem to have improved much. The area was whitened by a seven-day stretch of hazardous thick smog, prompting authorities to order 200 factories to suspend operations, 550 others to halve production and a fifth of private vehicles to stay off the roads.

"The cement factories are all closed," said Guo, the laid-off cement worker, "but the air pollution is still the same as before."