Republicans are dismissing President Barack Obama's new $3.9 trillion budget as nothing more than a Democratic manifesto for this fall's congressional campaigns. 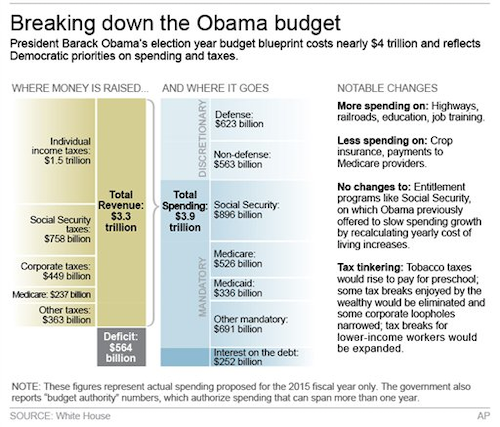 WASHINGTON (AP) -- Republicans are dismissing President Barack Obama's new $3.9 trillion budget as nothing more than a Democratic manifesto for this fall's congressional campaigns, but the

fiscal plan is taking hits from another quarter too — anti-deficit groups.

Obama on Tuesday sent lawmakers a 2015 budget top-heavy with provisions that have little chance of becoming law. They included $1 trillion in tax increases — mostly on the rich and corporations — and a collection of populist but mostly modest spending boosts for consumer protection, climate change research and improved technology in schools.

It even trumpeted $2.2 trillion in 10-year deficit reduction, though most of the proposed savings, including fresh tax boosts plus cuts in government payments to Medicare providers, seemed long shots to make it through Congress. Almost one-third came from claiming savings from the end of U.S. fighting in Iraq and troop withdrawals from Afghanistan.

That meant the budget's clearest impact was political: feeding Democrats' election-year narrative that they are trying to help narrow the income gap between rich and poor while creating jobs. Republicans, who see tax cuts as the surest way to help the economy, pounced.

"The president has once again opted for the political stunt for a budget that's more about firing up the president's base in an election year than about solving the nation's biggest and most persistent long-term challenges," said Senate Minority Leader Mitch McConnell, R-Ky.

"It's a road map for creating jobs with good wages and expanding opportunity for all Americans," the president said while visiting an elementary school in the nation's capital. He added that his plan would help curb budget deficits with higher taxes on the wealthy and other savings, "not by putting the burden on folks who can least afford it."

Despite those words, pressure for lawmakers to take serious swipes at budget shortfalls has faded.

After four years of record-setting annual deficits that each exceeded $1 trillion, the budget gap dropped to $680 billion in 2013 and could continue downward. Obama's budget projects shortfalls of $649 billion this year and $564 billion in 2015.

A bipartisan compromise curbing agency spending for the next two years, combined with the usual election-year pressures to avoid politically risky steps, has further diluted lawmakers' desires to tackle the problem.

They argue that retiring baby boomers and ever-rising health costs threaten to swamp revenues in the long run, running federal debt to levels that are hard to sustain without risking economic problems. Even with Obama's proposed savings, the government would still run up $4.9 trillion more in debt over the coming decade, on top of more than $14 trillion it already owes.

"The longer we wait, the more painful the changes will be," said Maya MacGuineas, a leader of the bipartisan Fix the Debt Campaign. "We can't let election-year malaise be an excuse for inaction on such an important issue."

"Stabilizing the debt over the long term is a key part of any sound fiscal policy and viable economic strategy for America," said Michael A. Peterson, president of the Peter G. Peterson Foundation.

In a nod to controlling the budget, Obama's fiscal plan proposes to live within a compromise spending limit for agencies reached in December between Ryan and Senate Budget Committee Chairman Patty Murray, D-Wis.

But on top of that, Obama proposed $55 billion in additional spending priorities, divided evenly between defense and domestic programs. These include repairs for bases and more weapons purchases for the military, plus domestic programs like upgrading national parks and increasing grants to schools that train students for jobs.

Obama would pay for the entire add-on by limiting tax breaks for retirement benefits of the wealthy, cutting some farm subsidies and boosting airline passenger fees — none of which have realistic chances of enactment this year.

Without that extra money, Pentagon spending would be $496 billion in 2015, the same as this year. The Pentagon plans to shrink the Army from 490,000 active-duty soldiers to as few as 440,000 over the coming five years, the smallest since just before World War II, reduce ship purchases and take other steps that defense hawks in Congress are unhappy with — especially since Russia's takeover of Ukraine's Crimea region.

Obama's budget also calls for $302 billion for roads, mass transit and railroads over the next four years; doubles to $1,000 the maximum earned income tax credit for childless low-income workers; and spends $66 billion over the next decade for preschool programs for all 4-year-olds.

Tobacco taxes would rise an additional 94 cents per pack, up from their current $1.01. A corporate tax overhaul would quickly yield $150 billion as loopholes were tightened on U.S. companies doing business abroad, and other companies and financial institutions would face $56 billion over 10 years from a new fee.

None of those proposals are going anywhere quickly on Capitol Hill.