Obama Looks To Governors For Help With Economy

His domestic priorities stalled in a divided Congress, President Barack Obama is looking for allies among America's governors. The president plans to meet Monday with governors of both parties at the White House, following a Sunday dinner in which he told state leaders their cooperation "is vital to make sure we're doing right by the American people." 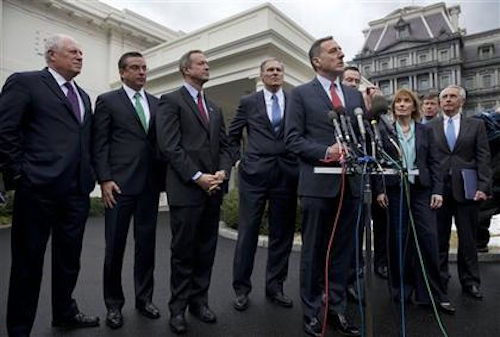 WASHINGTON (AP) -- His domestic priorities stalled in a divided Congress, President Barack Obama is looking for allies among America's governors.

"I look forward to working with each of you, not just in our meetings tomorrow, but throughout this year — what I hope to be a year of action," Obama said at a black-tie dinner with dozens of leaders who were in town for a meeting of the National Governors Association.

"When we've got a Congress that sometimes seems to have a difficult time acting, I want to make sure that I have the opportunity to partner with each of you in any way I can," the president said.

It's unclear whether some Republican governors are willing to collaborate with the Democratic president ahead of the November midterm elections.

Republicans were planning to share their ideas for improving the nation's economy. They include eliminating federal regulations and further delaying key provisions of Obama's health care overhaul.

In a Sunday interview, Louisiana Gov. Bobby Jindal said he would encourage the president to use his executive authority to jumpstart the economy.

Jindal said while it was "blatantly unconstitutional" for the president to ignore federal laws, Obama's position allows him to work around Congress in constructive ways.

"Instead of new regulations, new spending that haven't worked, I would argue he should use his newfound executive power to actually promote jobs," Jindal said, adding that Congress should be doing more as well. "It'd be hard to argue they could be doing less."

The White House has planned a series of events this week designed to highlight the president's desire for action.

In a Sunday message entitled, "We're not sitting still," Obama's senior adviser Dan Pfeiffer said the president this week would "announce new action on manufacturing, infrastructure and transportation jobs, and a new initiative to ensure everyone who is willing to work hard has a shot at success."

Not every governor will meet Monday with the president.

Facing multiple investigations in a political-retribution probe in New Jersey, the Republican leader will also skip a Monday press conference for the Republican Governors Association, which he leads.