At over 12 million jobs nationwide, manufacturing employment is now the highest it has been since 2009. The sector recovered handsomely from the setbacks it had faced earlier in the second and third quarters and is poised to start the new year on a strong footing. 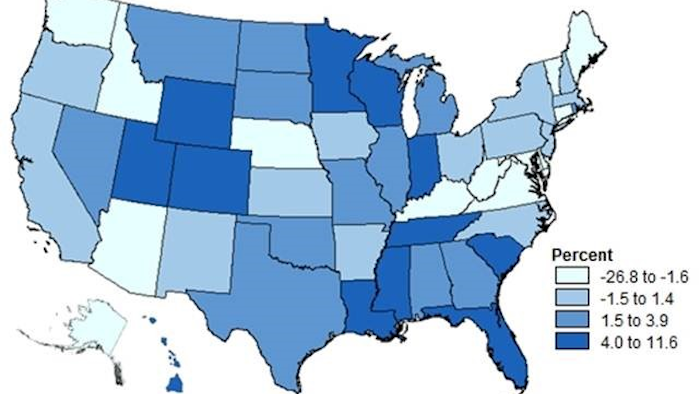 Regional manufacturing update: Factory employment jumped in the fourth quarter, more than compensating for losses earlier in the year. The sector’s resurgence in the traditionally strong manufacturing states of the Midwest and Southeast accounted for most of last quarter’s growth.

Manufacturing finished 2013 strong, as the nation’s fourth-quarter factory payrolls increased by an annualized 1.6 percent quarter on quarter (q/q). At over 12 million jobs nationwide, manufacturing employment is now the highest it has been since 2009. The sector recovered handsomely from the setbacks it had faced earlier in the second and third quarters and is poised to start the new year on a strong footing.

Most of last quarter’s rise was due to improved performance in the durable goods industries, particularly transportation equipment. The overall economic recovery released pent-up demand for cars; people finally have the income and confidence needed to make the auto purchases that they had been holding off on during the recession and early recovery years. Similarly, household formation is fueling the housing recovery and with it demand for furniture and appliances. Increased business and construction activity has also boosted demand for metals, machinery, and other equipment.

However, the manufacturing recovery has been far from uniform across the nation. Just over two-thirds of states (35 states) added factory jobs in the fourth quarter. The greatest expansions occurred in the manufacturing-heavy states of the Midwest and Southeast. Wisconsin topped the charts in terms of number of jobs recovered. The state added 8,800 manufacturing jobs last quarter, which amounted to a quarter-on-quarter increase of nearly 8 percent (annualized). Food manufacturing was responsible for most of the growth in America’s Dairyland. About 900 food processing firms are located in Wisconsin, including Hormel, Kraft, and General Mills. The food sector provided some stability to Wisconsin’s manufacturing sector during the recession as well, as the demand for food is influenced little by the business cycle.

Elsewhere in the Midwest, Indiana, Michigan, and Illinois also performed strongly. Indiana’s manufacturing share has been growing steadily since 2009; the sector currently accounts for 16.5 percent of total nonfarm employment in the state (the highest share of all states), and we expect this number to creep up further in coming years. The transportation equipment sector accounted for nearly all of the manufacturing growth in Indiana, as the Subaru, Toyota, and Rolls Royce plants added hundreds of jobs. In Michigan, manufacturing employment grew nearly 4 percent q/q. The state was buoyed by its strong transportation equipment and fabricated metals sectors; Chrysler and Midwest Bus expanded payrolls last year, and several auxiliary suppliers followed suit.

Overall, the Midwest experienced the highest year-over-year (y/y) boost in manufacturing employment in the fourth quarter (1.0 percent), closely followed by the South (0.7 percent).

Manufacturing conditions were not uniformly rosy, however. Even some of the traditionally strong manufacturing states suffered last quarter. For example, Ohio and Kentucky—states where manufacturing is responsible for more than 12 percent of employment—experienced sluggish payrolls growth. A drop in primary metals was responsible for Ohio’s underperformance, while Kentucky suffered from a large backslide in other durables. Additionally, manufacturing has been struggling in the Northeast for years, and last quarter was no different. Indeed, last quarter marked the seventh straight quarter of y/y employment declines in the region. Nearly all the New England states lost factory jobs, and New York was the only state in the Mid-Atlantic to make any significant progress.

In spite of poor performance in these states, the nation overall experienced a significant increase in manufacturing employment last quarter. Heightened labor investment indicates manufacturers’ growing confidence in the economic outlook. In addition, strong gross domestic product growth reported in the fourth quarter suggests a burgeoning demand for manufactured goods. We expect 2014 to be a good year for manufacturing, with the strongest employment growth occurring in the manufacturing-heavy states of the Midwest and Southeast.