Eurozone finance ministers and Greek officials haggled Monday over whether Athens needs to take more austerity measures before it emerges from its expiring bailout deal. European Union loans are due to stop at year end as Greece recovers from its economic crisis and debt... 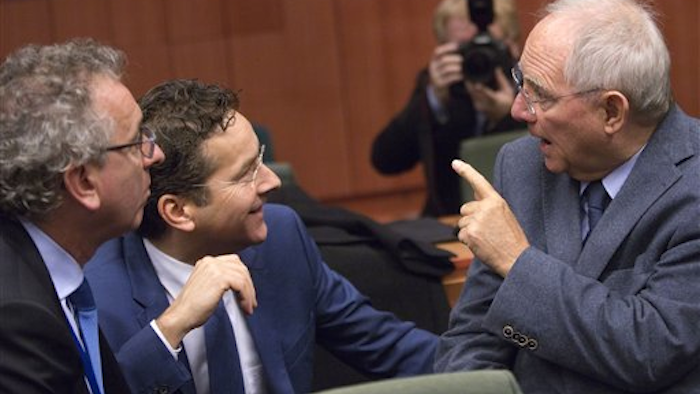 Eurozone finance ministers and Greek officials haggled Monday over whether Athens needs to take more austerity measures before it emerges from its expiring bailout deal.

European Union loans are due to stop at year end as Greece recovers from its economic crisis and debt default. Greece would then be switched from bailout loans to a standby credit line with less onerous conditions.

But first the EU and Greece have to agree the country has met the conditions for its current bailout money. The latest budget has raised concerns it is based on unrealistic assumptions. While the two sides haggle, one option is an extension.

Top European Commission finance official Pierre Moscovici said no decision was expected Monday but progress could be made, the Europa Press news agency reported. Jeroen Dijsselbloem, head of the eurozone finance ministers' group, said he was "not confident" about meeting deadlines over Greece.

Speaking at the close of the 2015 budget debate early Monday, Samaras said bailout lenders are pressing for additional austerity measures worth 1.7 billion euros next year.

"We reject that," he said. "And up to now it has been proved that our calculations are more accurate."

Samaras said there may be a "small" extension to the program, mainly to allow some national parliaments to vote on the new agreement that will succeed the current bailout.

A Greek official said Athens was seeking a technical extension but there was no indication a decision would be taken Monday.

"The Greek position is for a brief extension — lasting a few weeks — of a technical nature," he said. The official spoke on customary condition of anonymity.