When Prime Minister Shinzo Abe responded to Japan's surprise recession by delaying a sales-tax increase, it was a cause for worry, not celebration, for many young Japanese. This generation, barely aware of their country's economic heyday, frets that putting off tough decisions... 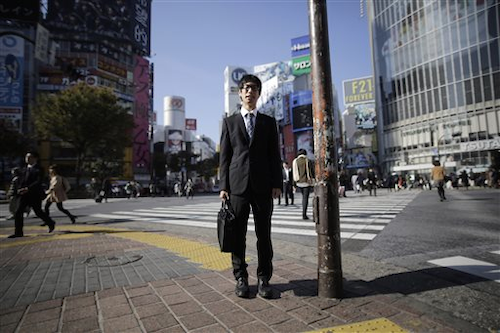 When Prime Minister Shinzo Abe responded to Japan's surprise recession by delaying a sales-tax increase, it was a cause for worry, not celebration, for many young Japanese. This generation, barely aware of their country's economic heyday, frets that putting off tough decisions now could make the future even worse.

Despite Abe's unprecedented stimulus efforts — almost everything short of dropping money from helicopters — Japan has slipped into recession less than two years after the last one. With the country's debt rising, population aging and job security fading, young people in particular wonder when, and if, Japan will bounce back.

"This is our children's future," said Mai Yamaguchi, a 29-year-old trading company employee heading into the gaudy Shibuya shopping area for an outing with her 4-month-old son and two other young moms and babies. "Child care, elder care, social welfare are all going to be even bigger burdens for us."

Under pressure to reduce the developed world's heaviest per-capita debt burden, at over a quadrillion yen ($8.5 trillion), Abe raised the sales tax from 5 percent to 8 percent in April, and was supposed to increase it to 10 percent next year. But after the economy, already fragile after two decades of malaise, shrank for two quarters in a row, he put off the second increase until 2017.

Yamaguchi was unimpressed by that decision. "I'm grateful to Mr. Abe for his policies to improve child care, but putting off the tax increase, well, they say the pension system is on the verge of bankruptcy. I think it would have been better to go ahead and raise the tax as planned," she said.

The generation born as Japan's economic bubble burst in the early 1990s will be supporting a vast cohort of retirees. Though their nation is rich, with ultra-modern public transport, low crime rates and excellent public health services, most are making do without the security of lifetime employment enjoyed by their parents and grandparents.

Meanwhile, Japan's economy is being eclipsed by neighboring China, whose up-and-coming tech and industrial companies are increasingly potent rivals.

Low birth rates and increased life expectancy mean that Japan's working age population is thinning out while the number of retirees and centenarians is swelling. The rapid aging of Japanese society is so evident in the mix of pedestrians on the street, in the media and in political discourse that it's an issue on just about everyone's mind.

Ryosuke Sunaga, a college senior decked out in his best job-hunting suit and brand new briefcase, said that by the time he has kids, he expects the sales tax will be at least 15 percent.

On Friday, Abe dissolved parliament for a Dec. 14 snap election he is calling to seek public approval of the tax hike delay and to affirm public support for his all-or-nothing policies to revive the world's third-largest economy.

He has pledged to vanquish Japan's long stagnation by injecting tens of trillions of yen (hundreds of billions of dollars) into the economy, pushing prices higher and the value of Japan's currency lower. He also has promised a sweeping and drastic overhaul to help improve the country's crumbling competitiveness.

So far, that combination, dubbed "Abenomics," has yielded mixed results.

Profits of big exporters have surged, thanks to the weaker yen, but higher costs have hit households and smaller companies. Despite some wage increases, many ordinary Japanese feel less well off than before, thanks to longer-term declines in wages and purchasing power.

"I'm not a permanent employee, and that worries me," said Kaori Endo, a 21-year-old bread factory worker from Ibaraki, north of Tokyo.

"Right now I'm living with my family, but I'm thinking about how I will support my parents. If I were a full employee, my parents would be less worried," said Endo, who plans to take professional tests to help improve her job status.

Over the past two decades, Japanese manufacturers struggling to compete with rivals in China have grown increasingly reliant on temporary or contract workers. Budget cuts have extended such practices into other fields such as teaching and nursing. Today, about four in 10 Japanese work in part-time or contract jobs with little job security and scant benefits. For young Japanese, permanent, career-track jobs are the exception, rather than the rule.

As lawmakers rush to prepare for the election, Abe is renewing his campaign to persuade Japanese companies to raise wages and offer more opportunities for women workers. He also has promised to slash corporate taxes beginning next year to entice companies to invest more in Japan.

In the meantime, Abe has been pushing ahead with cuts to social welfare, raising health insurance premiums and co-payment requirements for all, including retirees.

Ultimately, Japanese taxpayers will end up shouldering an even greater share of the country's surging costs for health insurance, elder care and pensions, said Koichi Hamada, an economic adviser to Abe.

"It's not very fair to poorer constituents, but still we have to go ahead with the consumption tax hike," Hamada said.

College student Yuto Tanaka, 19, said he knows that there's millions of yen (tens of thousands of dollars) in debt for every person in Japan. But fretting won't resolve that problem, and neither would an immediate tax hike, he said.

"If they raise the sales tax now, it will hurt the economy and tax revenues will fall anyway," said Tanaka, taking a break at the bustling intersection in Shibuya known as "Scramble" before heading to classes.

"We have to hope," he said. "If Japan falls to pieces, our society will be finished. We have to muddle through."