In a surprise, Japan said its economy, the world's 3rd-biggest following the U.S. and China, contracted 1.6 percent at an annual pace in the July-September quarter as consumer and corporate spending failed to regain momentum after a sales tax increase in April. Here are some implications for the... 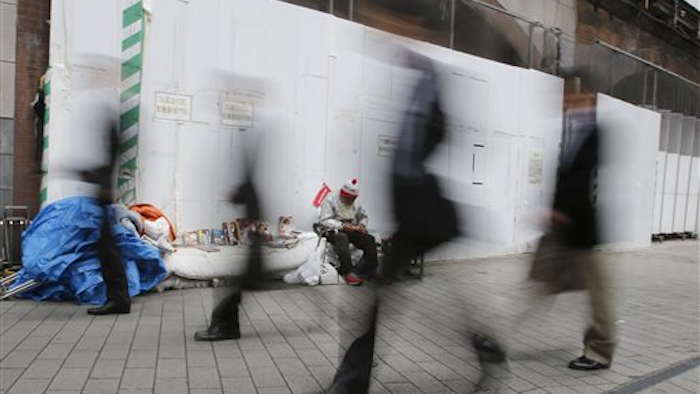 In a surprise, Japan said its economy, the world's 3rd-biggest following the U.S. and China, contracted 1.6 percent at an annual pace in the July-September quarter as consumer and corporate spending failed to regain momentum after a sales tax increase in April.

Here are some implications for the global economy and for Japan following the unexpectedly dismal GDP report:

CLOUDED OUTLOOK: A recession is generally regarded as two straight quarters of economic contraction, and Japan's economy shrank 7.1 percent in the April-June quarter, immediately following the sales tax hike. The slump comes as China's growth is slowing and Europe's economy is limping along. It could drag on Asia's growth if Japanese businesses hold back on investing abroad and companies and consumers buy fewer imports. The drop also adds to uncertainties in world financial markets.

WHAT'S NEXT: Prime Minister Shinzo Abe will likely delay another sales tax hike planned for October 2015, and use the miserable GDP reading as a reason for calling snap elections, possibly as early as next month, to try to shore up sagging public support for his government.

BIGGER PROBLEMS: Japan's population is shrinking and aging, creating a smaller domestic market and placing heavier tax burdens on younger wage-earners. Apart from its automakers, Japan's many manufacturers have lost their innovative edge and have been shifting production offshore. Household incomes peaked more than a decade ago, and a growing share of workers struggle to make ends meet on part-time, contract work.

TINKERING WITH TAXES: After many years of deficit spending, Japan needs tax increases to get its battered government finances into better shape and cut its total public debt, which is more than twice the size of the economy and the largest among developed nations. A delay in the tax hike will slow that process.

EXTRA STIMULUS: Abe is hoping that his "Abenomics" policies of lax monetary policy, fiscal spending and structural economic reforms will eventually get growth back on track. Analysts also expect him to announce a package worth about 3 trillion yen to 4 trillion yen ($26 billion to $35 billion) in extra spending on subsidies to low-income families, help for small and medium-sized companies and other measures meant to boost consumer spending and business investment.

UPWARD REVISION? Since Monday's data is preliminary, with a revision due Dec. 8, things may not be as bad as the initial GDP reading suggests. Rising orders for machinery and other industrial equipment could lead to higher manufacturing output in coming months.

IN THE LONG RUN: Abe has promised drastic reforms of labor regulations, the tax system and the health industry, among other areas, to help improve Japan's competitiveness. But so far he's made little headway, while most companies have not passed on windfall gains from stock price increases and surging profits to their workers in the form of higher wages. If Abe dissolves the parliament this week for a general election in mid-December, work on some of those initiatives will be tabled, slowing progress still further.