Is The U.S. Headed In The Right Direction?

Three-quarters of Americans doubt the federal government will address the important problems facing the country this year, according to a new Associated Press-GfK poll. 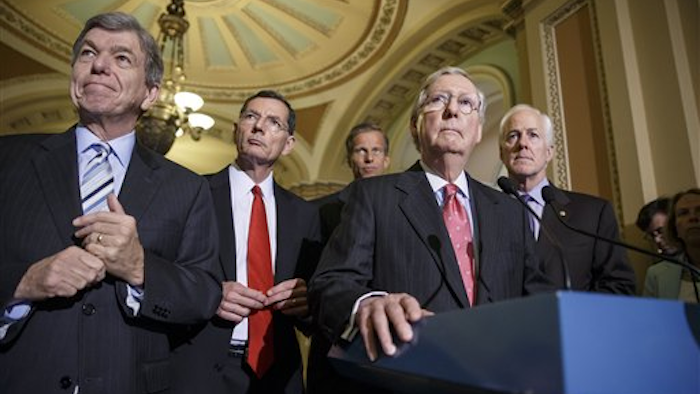 WASHINGTON (AP) -- Congress has checked out, and the American people have noticed.

Three-quarters of Americans doubt the federal government will address the important problems facing the country this year, according to a new Associated Press-GfK poll.

All told, only 28 percent of Americans think the nation is heading in the right direction, the lowest level in August of an election year since 2008. It's about on par with 2006, when Democrats took control of the U.S. House amid a backlash to the Iraq war.

This time around, it's not clear whether either party will benefit from the disaffection.

One-third say they hope the Republicans take control of Congress outright this fall — which the GOP can accomplish with a net gain of six seats in the U.S. Senate while holding the U.S. House. The same share want to see Democrats lead Congress — a far less likely possibility.

The final third? They say it just doesn't matter who takes control of Congress.

Overall, just 13 percent of Americans approve of the way Congress overall is handling its job.

There are some signs in the new poll that Republicans have gained ground as the height of the campaign approaches. In May, they trailed Democrats a bit on who ought to control Congress. Partisans are about equally likely to say they'd like to see their own in charge of Congress after November 4, with about three-quarters in each party saying they hope their side winds up in control. Democrats are a bit less apt to say they want their own party to win than they were in May, 74 percent in the new poll compared with 80 percent then.

And the GOP now holds narrow advantages over Democrats on handling an array of top issues, including the economy, immigration and the federal budget.

Fewer people have confidence in the federal government's ability to make progress on the important problems and issues facing the country in 2014 than at the start of the year, with 74 percent saying they have little or no confidence. That's a slight change from the 70 percent who said so in a December AP-NORC Center for Public Affairs Research survey. That shift in confidence stems from a small drop-off among Democrats. While 56 percent lacked confidence in December, 62 percent say the same now.

Overall, few express faith in those currently on Capitol Hill. Just 36 percent say they'd like to see their own member of Congress re-elected, 62 percent say they want someone else to win this November. So far, just three House incumbents have been ousted in primaries this year, and none in the Senate. The Congressional approval rating, 13 percent in the new poll, lags behind President Barack Obama's 40 percent.

The decline in optimism about the country's path in the new poll seems to mirror those in October 2013 and August 2011, when congressional inaction led to the threat of a government shutdown in 2011 and a partial one in 2013. Among Democrats, the share saying the nation is heading in the right direction dipped 11 points since May, to 49 percent, while among independents, it's down slightly to 23 percent. Among Republicans, the 9 percent saying the country is heading the right way is similar to May. The October 2013 and August 2011 declines in right direction were also driven by sharp drops among Democrats and independents.

Among those who say they are highly likely to vote this fall, just 8 percent say they approve of the way Congress is handling its job, though 43 percent would like to see their member of Congress re-elected, a bit higher than among all adults. Republicans have an edge among this group as the party more preferred to control Congress, 43 percent to 34 percent, with 23 percent saying it doesn't matter.

The AP-GfK Poll was conducted July 24-28, 2014, using KnowledgePanel, GfK's probability-based online panel designed to be representative of the U.S. population. It involved online interviews with 1,044 adults and has a margin of sampling error of plus or minus 3.4 percentage points for all respondents. It is larger for subgroups.

Respondents were first selected randomly using phone or mail survey methods and were later interviewed online. People selected for KnowledgePanel who didn't otherwise have access to the Internet were provided with the ability to access the Internet at no cost to them.