McDonald's said Monday that it was starting the test and teaming up with Postmates, a service that is also working with Chipotle and Starbucks. 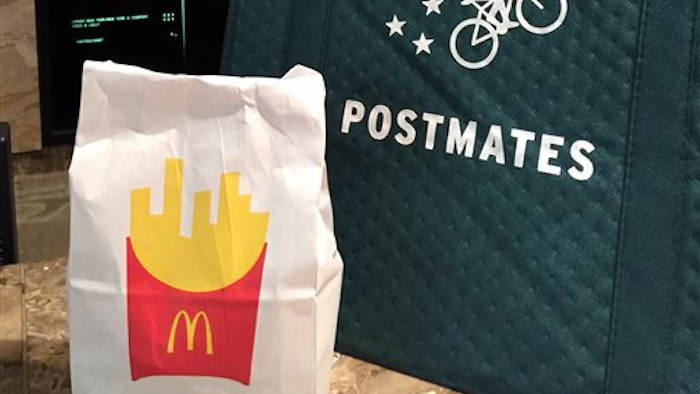 On the same day McDonald's said it would begin testing delivery in New York, an order placed for two cheeseburgers, two large fries and a vanilla shake took about a half-hour to arrive at The Associated Press headquarters.

The whipped cream on the shake was a little melted, and an order of apple slices was missing. But the burgers and fries were warm.

The bill came to $23.32, including tip — nearly double the cost if a reporter had walked around the corner to the nearest McDonald's to pick up the food.

The world's biggest burger chain said Monday that it was starting the test and teaming up with Postmates, a service that is also working with Chipotle and Starbucks. It's the latest sign that fast-food chains are eager to figure out ways to feed customer demands for greater convenience.

Already, Burger King has offered delivery in select regions since 2012. Others are experimenting with quicker takeout: Taco Bell lets customers order and pay in advance on its mobile app, and Starbucks said it plans to offer mobile pay-ahead later this year.

For fast-food chains, working with Postmates is a way to move into delivery by tapping into an existing network. Postmates compares itself to the car service Uber, and says it has a "fleet" of 10,000 delivery people who work as independent contractors.

Its partnership with fast-food companies is a bit odd, since Postmates offers delivery from a wide array of restaurants. That means people could already get some McDonald's, Starbucks and other food delivered in the two dozen major metropolitan areas where Postmates operates.

By officially linking up with Postmates, however, companies can exert greater control over the process, said Holger Luedorf, head of business development at Postmates.

With Chipotle, for instance, the delivery fee is capped at $7.99 and the chain's menu is optimized for the Postmates app. Chipotle says delivery is available wherever Postmates operates. And Starbucks is integrating Postmates into its app as part of its delivery rollout in Seattle later this year. The coffee chain said there will be a flat delivery fee, which hasn't yet been disclosed.

Without providing details, Luedorf said Postmates is in talks with other companies as well.

Still, a big part of the attraction of fast-food is that it's cheap, so the demand for it will hinge on whether people think the added cost is worth the indulgence.

Postmates' delivery fees range from $5 to $20, depending on the distance, said April Conyers, a Postmates representative. There's also a 9 percent service fee, and the tip.

McDonald's said the test with Postmates in New York City includes 88 restaurants. The company and Postmates did not provide details on how the pilot differs from regular Postmates deliveries of McDonald's.

Orders can be placed online or through the Postmates app. The AP placed orders on two separate days — one for breakfast and one for lunch.

After searching for McDonald's, the app and website gave locations within several blocks from the AP office, but the one that is closest wasn't on the list.

Once the orders were accepted, an image of the delivery person appeared on the screen along with their customer rating and phone number.

Confirmation emails for each order said the deliveries would take up to an hour, but both arrived in about a half-hour.

(And they offered to reimburse the cost of the missing apples.)

Timing seems to play a role for delivery fees. For a McDonald's roughly three blocks away in New York City, the delivery fee for the order of burgers, fries and a shake in the late afternoon came to $5.50.

However, an attempt to order an Egg McMuffin at 7 a.m. resulted in an $11 delivery fee.

There was no explanation for the doubled fee on the website, but a notification on the app said "blitz pricing" was in effect. About 20 minutes later, the delivery fee came back down to $5.50

The 9 percent service fee is fixed. The tip options of 10, 15 or 20 percent are calculated based on the total cost of the order, including the delivery fee.

Delivery people are paid with 80 percent of the delivery fee and tips. In New York, they can choose to walk, bike or drive to make their deliveries.

They don't wear special uniforms, but are given delivery bags that help retain heat.

Michael Rothberg, a 27-year-old delivery person, said Postmates ran a background check on him and that he attended a 1-hour orientation before starting work.

Rothberg, who is graduating from medical school in three weeks, said he signed up for Postmates to get some extra spending money. He said he can check the "hot spots" for deliveries on his phone, and gets alerts on deliveries, which he can choose to accept.

Based on his cut of the delivery fee and a 20 percent tip, his pay to deliver an Egg McMuffin was $6.33.