U.S. companies hired in April at the slowest pace in nearly a year and a half, a private survey found, as the strong dollar dragged down overseas sales and energy companies cut back on spending in the face of lower oil prices. 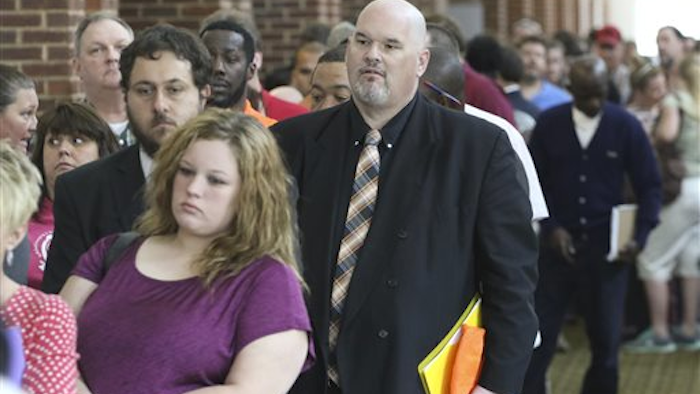 Washington, D.C. — U.S. companies hired in April at the slowest pace in nearly a year and a half, a private survey found, as the strong dollar dragged down overseas sales and energy companies cut back on spending in the face of lower oil prices.

Payroll processor ADP said Wednesday that businesses added just 169,000 jobs in April, down from 175,000 in the previous month. That was the fewest since January 2014. March's total was revised down from 189,000.

The weak showing could raise fears that the economy is slipping into a period of sluggish growth, after expanding at a healthy pace for most of last year. A big increase in the trade gap, reported Tuesday, means the economy probably shrank in the first quarter.

That could weigh on job gains. Employers added just 126,000 jobs in March, according to the government's data, the fewest in 15 months. April's jobs report will be released Friday, and economists forecast hiring rebounded to 220,000 last month. But the disappointing ADP figures suggest that hiring will remain sluggish.

Hiring in April fell sharply among large companies with more than 500 workers, according to ADP. They added just 5,000 jobs, the fewest in six months.

Mark Zandi, chief economist at Moody's Analytics, blamed the shortfall mostly on the dollar's strength, which makes large companies' exports more expensive overseas. The dollar has risen about 15 percent in value against a basket of other currencies in the past year. Moody's helps compile the ADP data.

The strong dollar has also hit factories, which shed 10,000 jobs last month, the most in more than five years, according to ADP. Falling oil prices have also slowed manufacturing, as energy companies cut orders for steel pipe and other machinery needed for drilling.