Havana's harbor has long been an unsightly jumble of piers left to crumble into piles of rusty, twisted rebar. Its dominant feature is a refinery smokestack across the bay that belches smoke and flame 24 hours a day.But lately demolition crews and towering cranes have been working double-time to finally tear down the ruined docks. 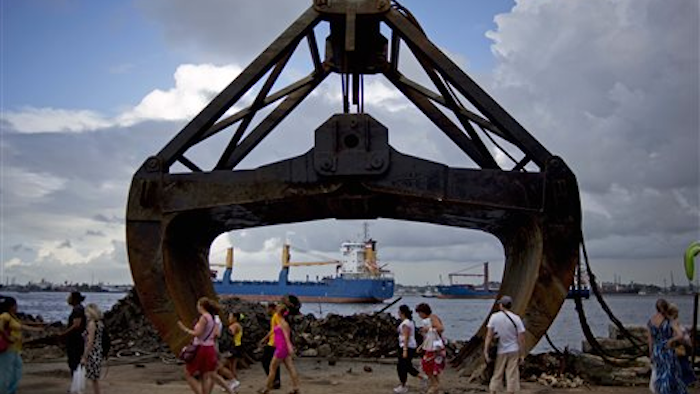 HAVANA (AP) -- Havana's harbor has long been an unsightly jumble of piers left to crumble into piles of rusty, twisted rebar. Its dominant feature is a refinery smokestack across the bay that belches smoke and flame 24 hours a day.

But lately demolition crews and towering cranes have been working double-time to finally tear down the ruined docks. Gentrification is already evident in the lovingly restored bayside plazas of Old Havana, and now comes an ambitious plan to turn the polluted waterfront into a gleaming promenade with restaurants, cafes and public parks.

It has all been made possible because of a new port under construction west of the Cuban capital that promises to knock Havana from its perch as Cuba's No. 1 shipping hub. Where some might bemoan the economic loss, city authorities instead see an opportunity to transform this seedy industrial zone and revitalize the depressed, densely packed Spanish colonial core.

"The bay is symbolic. It is what gave birth to the city and it is part of what we are today," said Orlando Inclan, an architect with the Havana City Historian's Office, which is overseeing the project. "Now it's time to redefine it."

Inclan envisions in the space of just a few years pelicans, gulls and sailboats replacing tankers, freighters and mothballed navy vessels as the main inhabitants of the harbor of Havana.

He sees children playing and couples taking romantic sunset strolls alongside the mirror-flat water, as tourists sip craft ales at a cavernous brewery that's set to become the first jewel of the new waterfront.

Workers milled about on a recent afternoon putting finishing touches on the woodwork of the former tobacco warehouse in anticipation of the brewery's opening in a month or so.

The project not only covers the abandoned docks, about half of which have already been razed, but also stretches kilometers (miles) south to shipyards that will be decommissioned, cleaned up and repurposed.

"It's a chance to reverse the deterioration of the entire southern part (of the bay), where public space, infrastructure and environmental values are lacking," Inclan said.

Havana Harbor's industrial days have been numbered since 2009. Back then authorities determined that the purse-shaped bay, with a narrow, shallow entrance made even shallower by an automobile tunnel that traverses the mouth, could not be expanded.

With Brazilian help, work began on a new $900 million port at Mariel, about 45 kilometers (30 miles) west of Havana. The city is best known for the Mariel Boatlift of 1980, when more than 100,000 Cubans fled the island by sea in the space of just six months.

Designed to accommodate bigger, deeper-drafting vessels that will begin passing through an expanded Panama Canal in 2015, the Mariel port is set to open to traffic around the end of the year.

The City Historian's Office, run by powerful and well-connected Eusebio Leal, would not divulge timetables or cost figures for the Havana Harbor makeover.

Arturo Lopez-Levy, a Cuban economist who lectures at the University of Denver, estimated that such a project could easily top $100 million factoring in things such as environmental cleanup and the cost of moving industrial activity.

Cuba has a spotty record of following through on its grand ambitions, and money is always tight. However Leal's office can point to a long list of accomplishments since the 1990s, when it began restoring hundreds of historic buildings and converting them into bustling hotels and restaurants, breathing life into Old Havana and making it a major attraction.

"There is a bet on reviving investment and development of tourism as one of the most important industries," Lopez-Levy said.

Tourism is already one of the island's top sources of foreign income, bringing in $2.6 billion in 2012.

Havana is planning for both its current reality — millions of Canadian and European travelers visiting each year and freighters full of Chinese goods arriving on its shores — and also a day when the 51-year U.S. economic embargo is no more.

When that might happen is anyone's guess, but observers say the "forbidden island" would likely be flooded with anywhere from 1 million to 5 million American travelers a year, not to mention U.S. exporters jostling to stake a claim in a market less than 150 kilometers (100 miles) from Florida.

A beautified waterfront would add yet another lucrative attraction, said Julio Cesar Perez, a Cuban urban planner and visiting scholar at Harvard.

"You have to understand that by doing this you can generate wealth, value," said Perez, who, independent of the Historian's Office, drew up a similar master revitalization plan for Havana with the harbor as its crux. "At the same time ... you need to deal with the housing problem" afflicting ordinary Cubans.

Housing is chronically short across the island, nowhere more so than in cramped Old Havana. When the Historian's Office restores old buildings, it's always a headache figuring out how and where to rehouse families.

Leal's employees say the harbor makeover will dramatically improve life for locals especially in the seediest part of the harbor, the predominantly industrial southern bay.

"Just as has happened with many cities that have transformed their waterfront, Havana has this opportunity, and right in the very center of the city," said Claudia Castillo, another architect in Leal's office.

Authorities also have been working since 2006 on cleaning up the water itself, sealing off industrial drains and installing a treatment plant on the Luyano River that feeds into the bay. Fishermen say the improvement is significant and avian and aquatic life has notably increased, even if plastic bags and tires still lap against the seawall.

Neighbors said many in the area who initially thought about selling their homes after President Raul Castro legalized the real estate market in 2011 decided to stay put upon hearing about the makeover — or significantly raised their asking prices.

"I see a bright future for the port zone," said Runero Pena, a 64-year-old who lives near the waterfront. "We are very happy. We know this is a long-term program that won't happen overnight, but this area is going to see great development."