Chemistry student Jiang Wenying graduated three years ago and decided the job market was so tough she might as well go back to school for a graduate degree. Now she's finding it even worse, in what looks to be China's tightest market ever for job-seeking graduates. 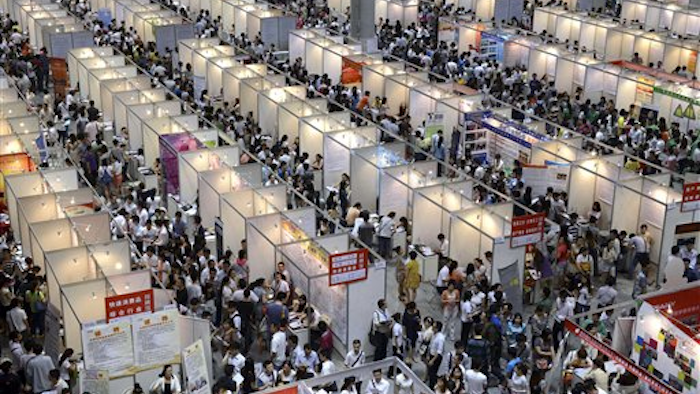 BEIJING (AP) -- Chemistry student Jiang Wenying graduated three years ago and decided the job market was so tough she might as well go back to school for a graduate degree. Now she's finding it even worse, in what looks to be China's tightest market ever for job-seeking graduates.

Jiang says she has sent out more than 1,000 job applications, netting no more than 10 interviews and not a single job offer.

Jiang, who received her graduate degree in chemical industry from the Harbin University of Science and Technology this year, recently traveled to Beijing to try her luck at a university campus job fair, but found no firm prospects there either.

"The job market has been getting worse by the year," said the young woman, who looked dejected as she slouched against a column at the end of the job fair. She spoke just loud enough to be audible above the din of workers dismantling booths.

"There are far more chemical industry students than needed," she said.

While the job market in China is still much better than in many other parts of the world, 2013 is being billed locally as the worst for young graduates. A record number of them — about 7 million — are leaving universities and graduate schools to seek their first employment at a time when companies are hiring fewer people. Women appear to be faring worse than men.

The stunning economic growth of the past dozen years is slowing, and gone are the days when graduates were assigned jobs in their respective industries — a system dismantled in the 1990s in China's fast-changing economy.

The issue is politically sensitive because China's urban, educated class has become outspoken about government shortcomings in dealing with ills ranging from endemic corruption to polluted air, and the tight job market could leave many among them disgruntled after more than a decade of economic expansion and rising expectations.

This year's biggest-ever graduating class is the fruit of many years of government policy to boost enrollment, but the number of jobs for new hires has declined about 15 percent compared with the previous year, said Yang Xiong, director of the Youth Research Center in Shanghai Academy of Social Sciences.

"With those two factors, you end up with the toughest job market this year," Yang said. "The global economy is not faring well, and China is part of the globalization. With closure of many export-oriented businesses and appreciation of the Chinese currency, employers have to slash on personnel."

Preliminary data reported in state media show about a third of the 2013 class had signed employment contracts by May, compared to more than 40 percent a year ago. The number of students applying for graduate schools has reached a new high of 1.76 million.

The notion that education provides the promise of success has ancient, Confucian roots in China. It continues today, perhaps even more so because of family planning policies that often put the burden of a family's future on a single child.

The country's policy-makers — aware that a lack of jobs for the young and educated could be seen as a failure to uphold the social contract — have been urging that every measure be taken to help newly minted graduates gain employment, including creating more community-level jobs, reducing paperwork, recruiting for the military and promoting entrepreneurship.

"The employment of the graduating class affects economic development, improvement to living standards, and social stability," said a central government document issued in mid-May when the issue was on the agenda of a state council meeting presided by Premier Li Keqiang.

Education Ministry spokeswoman Xu Mei told state media that the ministry and local education bureaus would offer more job fairs and online job-seeking services. "All sides are making efforts to ensure the employment rate of this year's class won't get lower," she said. AP's request for an interview with a ministry official on the issue was not immediately answered.

Some job seekers are lowering their expectations. Wang Yuan, an industrial design major at southern China's Hunan Industrial University, thought a design job would be waiting for her after graduation. But nothing has become of the two dozen job applications she has sent out since last fall.

"They were like stones sinking into the sea," said Wang, 23.

She has since changed her tack. "Any job will do, and choosiness will have to come later," she said.

"There were rounds of interviews, and many candidates had impressive academic credentials," she said. "I was so nervous I couldn't sleep at night, and now I'm left with a migraine."

Lu Feng, an electronics senior at Xidian University in central Chinese city of Xi'an, said he was shocked to see a room filled with more than 1,000 applicants when he showed up for an interview with a technology firm from southern China recruiting for 20 jobs in his city. He got hired, and the job hunt took him only a couple of weeks.

Lu and several other male job seekers interviewed by The Associated Press said they feel they have better job prospects than females, and can even afford to be choosy.

China's job market is notoriously discriminating. Employers have openly snubbed women, out-of-town job applicants and graduates from less prestigious institutions. This year, the Chinese State Council has demanded that employers make no requirement on gender, ethnicity, age, residence and type of school when hiring graduates of higher education, but the directive is unlikely to be followed.

When compared with elsewhere, China's economy is still doing relatively well, with an overall urban unemployment rate of only 4.1 percent in 2012. That compared with unemployment rates ranging from 4.7 percent to more than 27 percent in European countries; the U.S. rate was 7.5 percent last month. However, a large share of China's population is in the countryside, and urban data only cover a portion of China's workforce.

Luo Xiaoming, editor-in-chief of the Chinese-language financial news site Caixun.com, said China's economic growth of 7.7 percent for the first quarter should be able to absorb the increase in job seekers, but the challenge in the job market reflects a flaw in China's investment-driven economy, which is expanding without job growth.

"This economic model has misled the market, resulting in excessive production capacity, and its lack of openness to the private sector has stifled innovation and entrepreneurship," Luo said in explaining the lack of jobs in China. "Economic transformation has been stagnant."

Some lay the blame on China's education system, which they say is a mismatch to China's job market.

Many jobs require only a polytechnical education, and perhaps China is currently producing too many university graduates, including doctoral-level students, said Yang, the youth research center director. That means many graduates end up with lower-level jobs that have little to do with their areas of study.

"Why would they want to take basic jobs? If they don't, they become unemployed," Yang said.