Will Obama Risk Going Over 'Cliff'?

It may be just a bluff or a bargaining ploy, but the White House is signaling that President Barack Obama is willing to let the country go over the "fiscal cliff," a hard-line negotiating strategy aimed at winning concessions from Republicans on taxes. 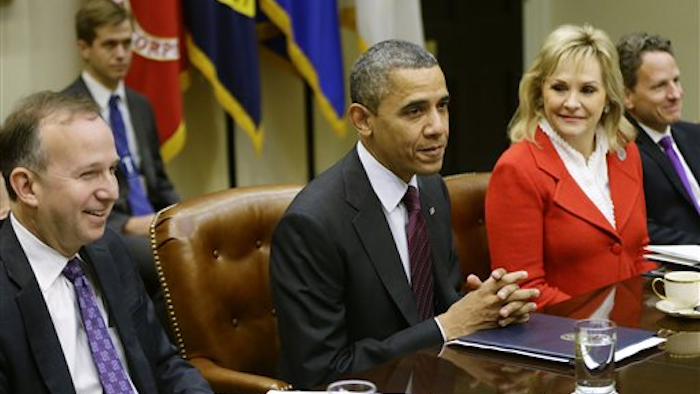 WASHINGTON (AP) -- It may be just a bluff or a bargaining ploy, but the White House is signaling that President Barack Obama is willing to let the country go over the "fiscal cliff," a hard-line negotiating strategy aimed at winning concessions from Republicans on taxes.

If Washington really does fail to avert the looming series of tax hikes and spending cuts, the White House will portray Republicans as the culprits for insisting on protecting tax cuts for the wealthy, an effort the administration is laying the groundwork for now.

"This is a choice of the Republican Party," said Dan Pfeiffer, White House communications director. "If they are willing to do higher rates on the wealthy, there's a lot we can talk about. And if they are not, then they'll push us over the cliff."

But going over the cliff also would be full of risk for a president fresh off re-election and facing at least two more years of divided government.

Ending the year without a deal could roil financial markets and dent consumer confidence just as the economy is strengthening. It could make it harder for Obama to get Republican help on his second-term priorities like overhauling the immigration system and the nation's tax code, or in getting potential Cabinet replacements confirmed.

And it would signal to the country that the president's campaign prediction that the GOP "fever" would break following his re-election was a pipe dream.

House Speaker John Boehner says Obama is playing a risky game. "If the president really wants to avoid sending the economy over the fiscal cliff, he has done nothing to demonstrate it," the speaker said.

White House advisers say the president wants to avoid going into next year without a tax and spending deal, a scenario they say would hurt the economy. But with few signs of progress in postelection negotiations with Republicans, administration officials are hardening their warning that Obama will take that risk if the GOP refuses to drop its opposition to raising tax rates on families making more than $250,000 a year.

Of course, the White House warning could be a bluff, offered in the belief that Republicans are unlikely to back down on taxes unless they believe Obama is willing to go over the cliff.

The White House says Obama's firm stand on tax rate increases for the wealthiest 2 percent of Americans is driven by economics. The debt-saddled country can't afford to continue with the George W. Bush-era tax cuts, the president and his advisers argue.

Obama has made that case to Republicans before only to back down in the final stages of negotiations. But this time around, the president and his team believe they hold the political leverage.

There is some evidence to bolster that notion. Taxes were a centerpiece of the presidential campaign, with Obama running on a pledge to end the Bush tax cuts for the wealthiest Americans and return their rates to where they were in the 1990s, when the economy was thriving.

Exit polls showed that 60 percent of voters supported that position, an even higher percentage than backed Obama's re-election.

A new poll also suggests a majority of Americans would blame Republicans if the government goes over the fiscal cliff. Just 27 percent of those surveyed said they would blame Obama, compared with 53 percent who said they would point the finger at the GOP, according to the Washington Post-Pew Research Center Poll.

Seeking to cement those impressions, the White House is casting Republicans as willing to forgo tax cuts for the middle class in order to protect lower rates for wealthier Americans. Rates for all income earners will go up at the end of the year if both sides can't reach a deal.

In turn, Republicans say Obama is acting like a stubborn partisan who will put the economy in peril in order to get his way.

"My sense is the White House wants to go over the cliff," said Tony Fratto, a former Treasury and White House official under President George W. Bush. "That may be the only way they get rates they want."

Going over the cliff could mark a new low in the relationship between the president and congressional Republicans. While the contentious debates earlier in Obama's first term over funding the government and raising the nation's borrowing limit went right up to the edge, both sides were always able to reach a deal.

As Obama ran for re-election, he sought to assure voters weary of Washington's bickering that things would be better if he won a second term.

"My hope, my expectation, is that after the election, now that it turns out that the goal of beating Obama doesn't make much sense because I'm not running again, that we can start getting some cooperation again," he added optimistically.