The impetus is the company's bottom lines — conserving water guarantees long-term access to the most crucial ingredient in their products. 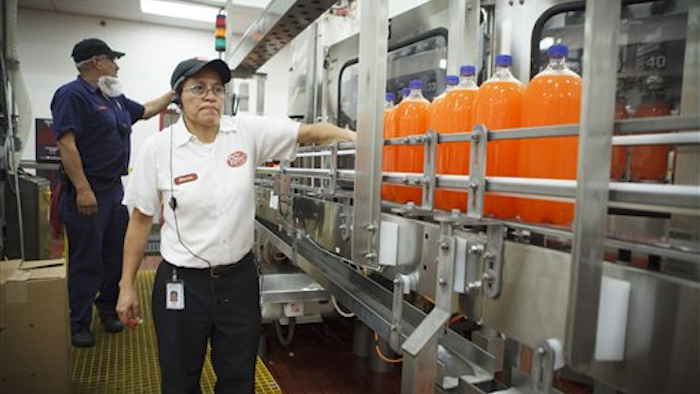 In this June 15, 2012 photo, Blanca Cervantes starts up a line of Sunkist at the Dr Pepper Snapple bottling plant in Houston. (AP Photo/Michael Stravato)

WEST COLUMBIA, Texas (AP) — Fifty miles outside the nation's fourth-largest city is a massive field of waist-high grass, buzzing bees and palm-size butterflies, just waiting to be ripped up by an entrepreneur.

Rather than develop this pristine remnant of coastal prairie, vast enough to house more than 300 football fields, the Dr Pepper Snapple Group is investing hundreds of thousands of dollars to ensure it remains untouched.

The project is part of the company's $1.1 million investment in the Nature Conservancy, designed to benefit five Texas watersheds — including Nash Prairie outside of Houston — from which its bottling plants draw water. The money will go toward preservation work, such as reseeding the grass, to restore and expand an ecosystem that once covered 6 million acres from southwestern Louisiana through Texas.

The projects will improve water quality and quantity by preserving the prairies' sponge-like attributes. But for Dr Pepper and other beverage companies engaged in similar work, the impetus is their bottom line — conserving water guarantees long-term access to the most crucial ingredient in their products.

"If there's not fresh water, there's no business — it's just that simple," said Laura Huffman, state director of the Nature Conservancy in Texas. "It is their number one infrastructure concern. ... Water tops the list, above roads, above energy, above all else, because if you don't get water right, you're not making anything."

The biggest players — from Coca-Cola and Pepsi Co. to Miller and MolsonCoors — as well as smaller, regional beverage companies list water as a risk in long-term plans. In 2006, 18 companies created an alliance called the Beverage Industry Environmental Roundtable to tackle water, energy and other issues that could affect the industry's growth. There is no total available for how much has been invested in water conservation projects in the past five years, but experts believe it's more than $500 million dollars.

Thomas Lyon, a professor at the University of Michigan who researches connections between industry and the environment, said three factors have pushed beverage companies to conserve water: future markets in developing countries don't drink enough soft drinks, from their perspective; the impacts of climate change are starting to become more apparent; and some of the countries targeted for growth are the same ones experts believe will be most affected by climate change.

"At the heart of it ... is their bottom line," Lyon said. "Water is a finite resource and they desperately realize that it could become a major problem."

About a decade ago, when advance planning started to highlight water constraints, many companies streamlined processes and installed new, more efficient technologies within factories and plants, conserving millions of gallons of water and millions of dollars.

About five years ago, the corporations began partnering with environmental groups, funding projects to bring water to people in developing countries, such as India, China and Africa, where water is most scarce and infrastructure is often deficient.

The partnerships help everyone: environmental groups receive much sought-after funding; cash-strapped governments tackle projects they can't afford; and beverage companies can market themselves as "green" by conserving the most crucial, finite resource on Earth and ensure the future of their business.

And while the companies are taking steps to conserve water and, in many cases, cut energy use and greenhouse gas emissions, they still contribute to a larger global problem: They bottle many of their products in plastic. By some estimates, 2.5 million plastic bottles are trashed every hour in the United States — and less than 30 percent is recycled.

Between 2008 and 2010, 69 percent of the alliance's 1,600 manufacturing facilities decreased water use by 9 percent — or 10.3 billion gallons, enough to supply New York City for eight days.

To combat the toll on the environment, Dr Pepper cleaned bottles with air instead of water on 56 production lines in 2010, and by 2015, it hopes to cut water use and wastewater discharge by 10 percent for each gallon of finished product.

"As a beverage company, water is in everything we do, it's a primary ingredient," said Tim Gratto, Dr Pepper's vice president of sustainability.

The Coca-Cola Co. has committed to improving water efficiency by 20 percent by the end of this year and becoming water neutral — returning to the environment any water used. The company is already returning 35 percent.

For Pepsi Co., the wakeup call came when it laid out four possible scenarios for 2030 and discovered water was the greatest risk in each. Last year, Pepsi met its goal of becoming 20 percent more efficient by 2015, saving the company some $17 million in water expenses over five years, said Dan Bena, the company's director of sustainability.

Pepsi's other goal is to provide 3 million people with access to clean drinking water by 2015, and has partnered with environmental groups to focus on rural areas in parts of the developing world. Each day, Bena said, 200 million hours are spent hauling water to communities that have no plumbing — more hours than all employees at Wal-Mart, UPS, McDonalds, IBM, Target and Kroger work in a week.

If you free up that time, he said, people can work more, making money that could potentially be spent buying Pepsi products.

And for beverage companies, that's the point.

"If you don't address it, it's a significant risk," Bena said. "If you do proactively address it ... you turn them into opportunities."

Most companies partner with environmental groups that have the scientific knowledge to guarantee success.

The partnership between Coca-Cola and the World Wildlife Fund expanded its focus in 2007 from rivers and streams near the company's Atlanta headquarters to preserving high-profile waterways, such as the Central Europe's Danube River and the Yangtze, Asia's longest river, said WWF CEO Carter Roberts.

"As a society, we're going to have a huge crash if all these companies don't take action at the same time," Roberts said.