Caught in the middle are hundreds of workers at the northern Ohio tank plant who are worried about losing high-paying manufacturing jobs during scarce job opportunities. 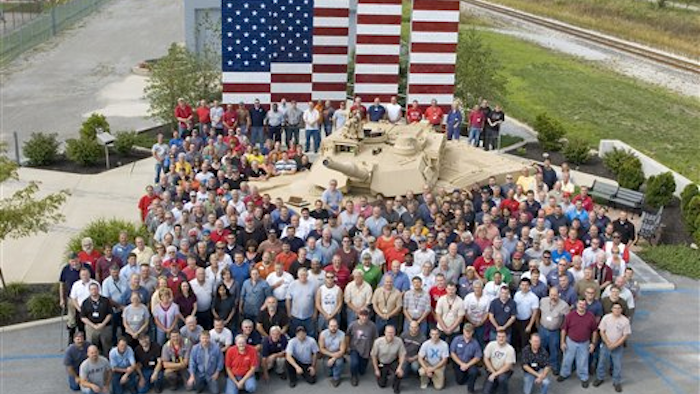 LIMA, Ohio (AP) — Rows of sand-colored armored vehicles ready for deployment are parked outside the nation's only tank manufacturing plant. It's where welders and machinists for more than three decades have built the Abrams tank, which former President George W. Bush once called "the most effective armored vehicle in the history of warfare."

But the Pentagon says it will soon have enough tanks and wants to halt production for several years as it wrestles with deep cuts in military spending over the next decade.

Some members of Congress are attempting to restore funding for the tanks and other military weapons in a defense spending bill working its way through Capitol Hill, a move the White House is threatening to veto. The White House says adding more money to the budget will trigger deeper cuts because of an agreement made during a failed congressional attempt last year to reduce the deficit.

Caught in the middle are hundreds of workers at the northern Ohio tank plant who are worried about losing high-paying manufacturing jobs at a time when those positions are scarce.

"It's scary for everybody, but the rumors have flown like that since the day we all hired in," said Paul Matson, a welder who started at the plant in Lima in the early 1980s when there were 3,800 workers and tanks rolled off the assembly lines every day.

Now there are about 800 workers who refurbish the Abrams tanks with new weapons and sophisticated navigation and communications systems, churning out one tank about every two days. The plant also makes the Stryker light-armored vehicle.

The military's plan is to slow production of the M1A2 Abrams until 2014, when it wants to stop ordering them all together for about three years, until it's ready for the next generation of battle tanks. Army officials told lawmakers earlier this year that they must make tough choices.

It's the second straight year the military has sought to end funding for the tank.

"They're dangling this carrot over your head that they can shut you down at any time," said Russ Clewley, president of the United Auto Workers Local 2075, which represents production and skilled trade workers.

Doing that would devastate the plant, its manager said, and might not save much money in the long run.

Halting production for even a couple of years would mean the loss of many skilled trade workers who would most likely be forced to leave Ohio for work elsewhere, said Keith Deters, plant manager at the Joint Systems Manufacturing Center.

Lima, about 80 miles south of Toledo, was built around factories that made locomotives, car engines and auto parts. Not only is the tank plant a source of pride, it provides some of the best paying jobs in an area hit hard by manufacturing losses felt throughout the Rust Belt.

Rebuilding the tank plant's network of 800 suppliers nationwide would be a challenge too, Deters said.

"It's a much more costly issue than shutting the switch off, preserving the equipment and coming back and trying to hire new people," Deters said. "I don't know how that'd ever work. It'd take years."

General Dynamics Corp.'s land systems unit, which operates the government-owned plant, estimates that the cost of shutting down the plant and then restarting it would be $1.6 billion, while keeping it open with minimal production over four years would cost $1.4 billion.

The Army puts the price of pausing production much lower — around $400 million. It thinks the plant could stay open without its orders by building new tanks and upgrading older models for foreign countries such as Saudi Arabia, Israel and Morocco.

Plant operators aren't so sure.

There have been discussions with other countries about future projects, but "it's difficult to plan for work we don't have," Deters said.

U.S. Sen. Rob Portman, R-Ohio, made a pitch for the plant when he met with Israeli Defense Minister Ehud Barak in May. The plant already is doing some work on an armored personnel carrier for the Israeli military.

Portman, a member of the Senate Armed Services Committee and often mentioned as a possible running mate for Republican presidential candidate Mitt Romney, restored $91 million in funding for the plant in the fiscal 2013 defense spending bill. A House version of the bill includes $181 million — enough to pay for 33 new tanks.

Both sides will begin working on a compromise spending plan this summer. Portman is hopeful that the final amount for the tank plant will likely be somewhere in the middle, saying the combination of keeping the funding and increased foreign sales should keep it running.

"Mothballing the plant would be disastrous for the community and the military," he said.

What's unknown is whether President Barack Obama would veto the spending bill if it goes far above his proposed budget, as his administration has threatened.

U.S. Rep. Jim Jordan, R-Ohio, one of the House's most conservative members who lobbied for money for the plant, said maintaining the funding isn't about protecting jobs in his district.

"Our No. 1 priority is the defense of the country," he said. "Tanks always have been critical to our national defense, always will be."