The base Model S, which sells for $49,900 after a federal tax credit, can go 160 miles on one charge. Will a few thousands sales keep the company alive? 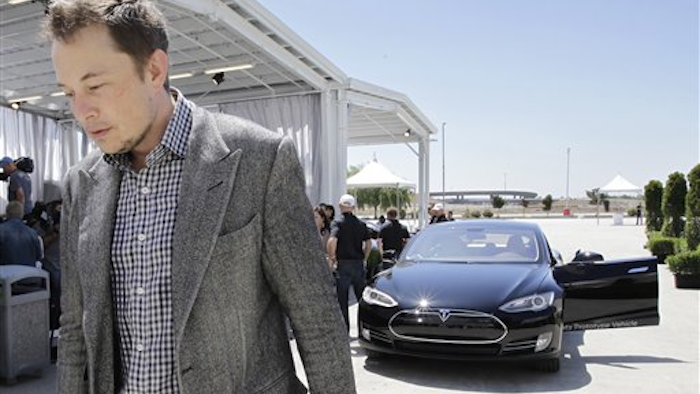 Tesla CEO Elon Musk walks past the Tesla Model S after a news conference at the Tesla factory in Fremont, Calif., Friday, June 22, 2012. The first Model S sedan car will be rolling off the assembly line on Friday. (AP Photo/Paul Sakuma)

FREMONT, Calif. (AP) — Electric car maker Tesla's first mass-market sedans took to the road Friday, but it's not certain whether their debut will make or break the fledgling company.

Ten of the sedans, called the Model S, rolled out the door at the company's Fremont factory during a ceremony that had the feel of a pep rally.

A crowd estimated to be in the thousands, including Tesla employees, their relatives, and a host of local politicians, cheered for the lineup of speakers that included California Gov. Jerry Brown. They roared when the first cars left the building.

Tesla Motors Inc. says more than 10,000 people have put down a refundable deposit for the five-seat sedan, and the Palo Alto company expects to sell 5,000 this year.

"This is another example of California on the move," Brown told the crowd. "This is a great car. You're a bunch of great workers."

The first cars driven out of the factory were part of what Tesla Vice President George Blankenship called the carmaker's "personal delivery program."

The first two cars were heading to buyers in Chicago, while the third was going to nearby Palo Alto.

"Arguably, it may be the most beautiful sedan in the marketplace," Blankenship said.

Despite the high spirits during Friday's ceremony, the debut of the Model S is a critical moment for the fledgling car company.

A Tesla Model S drives outside the Tesla factory in Fremont, Calif., Friday, June 22, 2012. The first Model S sedan car will be rolling off the assembly line on Friday. (AP Photo/Paul Sakuma)

Tesla lost nearly $1 billion selling an earlier model, a high-end electric sports car called the Roadster, and the company is hoping the Model S will help it turn the corner to profitability.

The company is the brainchild of PayPal billionaire and SpaceX founder Elon Musk. Tesla has always been considered a long shot to survive in the car business, but Musk, who is the chairman, CEO and product architect, spoke optimistically about the future, and of electric cars.

"It's about breaking a spell," he said. "The world has been under this illusion that electric cars cannot be as good as gasoline cars. It's showing that an electric car can in fact be the best car in the world."

Analysts and auto industry insiders have scoffed at the idea that a new car company could be created from scratch and built in a state with high operating costs like California.

The price tag on the Model S is also expected to limit sales, said Rebecca Lindland, an analyst with IHS Automotive.

Nissan has sold just under 30,000 all-electric Nissan Leaf hatchbacks since they went on sale at the end of 2010, but the Leaf is little more than half the price of a Model S.