Puma: How Big Is A Sneaker's Carbon Footprint?

To find out, Puma is tracking environmental costs inflicted at every step of the manufacturing process that transforms rubber, cotton and leather into sneakers. 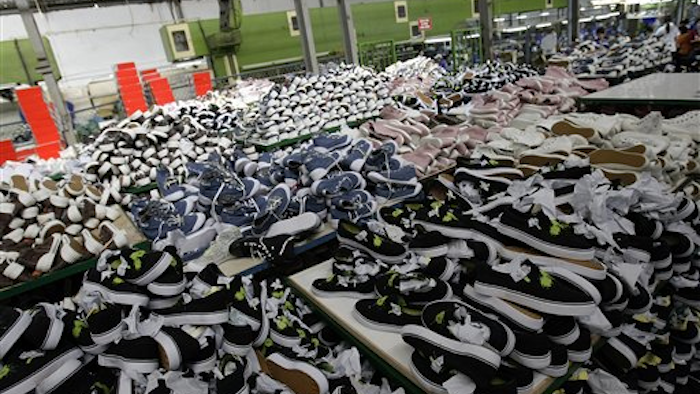 In a quest to find out, sportswear giant Puma's chairman, Jochem Zeitz, helped develop the Environmental Profit & Loss Account, or EP&L, a balance sheet that assigns a dollar figure to the environmental costs inflicted at every step of the manufacturing process that transforms rubber, cotton, leather and other materials into the brand's iconic soccer shoes, track suits and jerseys.

While Puma hasn't been able to break out the environmental cost of manufacturing a pair of shoes or other individual products, the label in 2010 put the estimated cost of its overall environmental impact at 145 million euros ($185 million). Puma distributes its products in more than 120 countries, employs more than 11,000 people worldwide and had more than 3 billion euros ($3.7 billion) in consolidated sales last year, more than half of that for footwear, according to the company's website.

"I realized that valuing natural capital and nature was something that had gained traction and was something that scientists were starting to come up with methodologies for ... and I thought 'why not apply that to a business context,'" Zeitz said on the sidelines on the United Nations' earth summit in Rio de Janeiro. "I was surprised that no one had done it before."

Zeitz didn't rule out the future possibility of being able to include on a product tag the monetary value of the environmental destruction inflicted by the making of a pair of sneakers. "I think consumers are beginning to get interested in this kind of thing," he said.

Long relegated to the fringes, initiatives to put dollar figures on the life-sustaining functions of ecosystems have gained currency in recent years, and such "green accounting" programs were very much in vogue at the U.N.'s Rio+20 conference on sustainable development that wrapped up on Friday.

Proponents hope that assigning monetary values to resources will help put the brakes on unfettered development. They say such initiatives could help make governments and corporations less likely to jeopardize the natural assets and environmental systems that make the planet habitable, which could help stave off the kind of wholesale environmental meltdown many scientists are predicting.

Case in point: a recent study that PricewaterhouseCooper did for the government of Malaysia, which was considering razing a mangrove forest to build a tourist resort. Taking into account the crucial role mangrove forests play in protecting coastlines from devastating storms and tidal waves, plus their status as incubators for a plethora of aquatic life, the team estimated the forest's value to society at $30 million a year.

The hotel was not built, said Malcolm Preston, who led the PricewaterhouseCooper team.

In the case of Puma, the sportswear manufacturer paired with PricewaterhouseCooper to assign a monetary value to each aspect of Puma's environmental degradation, from its land and water use to its pollution and waste generation, as well as its creation of greenhouse gases.

Teams from Puma and the consultancy company worked to follow the supply chain as far back as they could, tracing each raw material back to its country or even region of origin. The team then consulted academic studies that parse out the environmental costs associated with producing a kilogram of leather, cotton or rubber in a particular place. They later consulted other studies by environmental scientists that assigned a dollar price to those intangible but very real environmental costs.

For example, the team valued a ton of carbon dioxide at 66 euros a ton, said Preston, who led the team for the 2010 Puma account, the first and only EP&L the sportswear company has yet released.

"Is it accurate to the dollar? Absolutely not. But it gives you a reference point," acknowledged Preston. "Air, land and water have an intrinsic value to society that was never acknowledged before because those things were thought of as free."

Still, Preston acknowledged that the numbers were purely theoretical. They aren't counted in calculating the company's bottom line, nor does Puma actually have to pay out those sums to make up for the damage they've inflicted.

"Nobody's suggesting that you're going to pay for this environmental degradation," said Preston. "You're trying to put a value on it so you understand what's happening and can integrate it into your decision-making."

Zeitz said that having a clear breakdown of where and how Puma pollutes will help the company clean up its act.

The EP&L shows that raw materials account for the lion's share of brand's total environmental impact: production of water-thirsty cotton and rubber and land-devouring leather alone was behind 57 percent of the company's total impact, the balance sheet found. Possible changes to improve those numbers could include moving the sourcing of water-intensive raw materials from arid counties to rainier ones or finding a way to re-use scraps and other left-overs that might normally be thrown out, Zietz said.

Still, changes are difficult to implement precisely because of the gap between the company and its far-flung, sometimes opaque suppliers, which often provision hundreds or even thousands of different brands.

By 2015, the company aims to source 50 percent of its raw materials from suppliers that meet its sustainability criteria, said Zeitz, who has also been named PPR's Chief Sustainability Officer at Puma's parent company, luxury conglomerate PPR.

Still, not everyone is eager to see "green accounting" widely applied.

"You can imagine there are a lot of industrialists who aren't keen to have this adopted," Preston said. "Their numbers would be mind-boggling."