Wall Street protesters' attempts to block gates at some of the West Coast's busiest ports have led to some partial shutdowns. 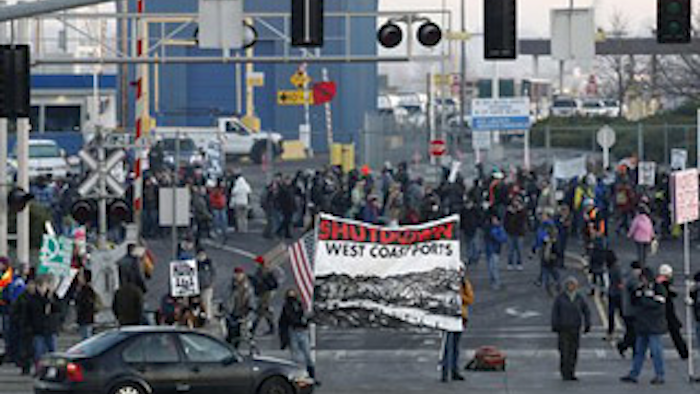 OAKLAND, Calif. (AP) — Hundreds of Wall Street protesters blocked gates at some of the West Coast's busiest ports on Monday, causing the partial shutdown of several in a day of demonstrations they hope will cut into the profits of the corporations that run the docks.

The closures affected some of the terminals at the ports in Oakland, Calif., Portland, Ore., and Longview, Wash., though it was not immediately clear the how much the shutdowns would affect operations and what the economic loss would be.

From California to as far away as Vancouver, British Columbia, protesters picketed gates at the ports, causing longer wait times for trucks. There were no major clashes with police.

And in Longview, Wash., workers were sent home out of concerns for their "health and safety."

The movement, which sprang up this fall against what it sees as corporate greed and economic inequality, is targeting "Wall Street on the waterfront" in its most dramatic gesture since police raids sent most remaining Occupy tent camps scattering last month.

It was unclear whether demonstrators could amass in sufficient numbers to significantly disrupt or force more port closures as they did last month during an overnight shift at the Port of Oakland. The union that represents longshoremen says it doesn't support the shutdowns.

Protesters are most upset by two West Coast companies: port operator SSA Marine and grain exporter EGT. The bank, Goldman Sachs, owns a major stake in SSA Marine and has been a frequent target of protesters.

They say they are standing up for workers against the port companies, which have had high-profile clashes with union workers lately. Longshoremen at the Port of Longview, for example, have had a longstanding dispute with EGT.

In Oakland, officials urged protesters to consider the impact on workers. Port workers and truck drivers say the protests will hurt them.

Several hundred people picketed at the port before dawn and blocked some trucks from going through at least two entrances. A long line of big rigs sat outside one of the entrances, unable to drive into the port.

"This is joke. What are they protesting?" said Christian Vega, 32, who sat in his truck carrying a load of recycled paper from Pittsburgh on Monday morning. He said the delay was costing him $600.

"It only hurts me and the other drivers. We have jobs and families to support and feed. Most of them don't," Vega said.

Police in riot gear monitored the scene as protesters marched in an oval and carried signs with messages such as "Shutdown Wall St. on the Waterfront." No major clashes were reported.

The port has appealed to city residents not to join the blockade, which they said could hurt the port's standing among customers and cost local jobs.

The Nov. 2 strike that culminated in the port's closure had strong union support. This time, the city's teachers union is backing Monday's action while construction workers opposed to the closure say the port has provided jobs to many unemployed workers and apprentices.

In rainy Southern California, about 200 protesters held a four-hour demonstration at the Port of Long Beach, delaying some truck traffic at one of the world's largest port complexes. There was one arrest.

In Portland, Ore., a couple of hundred protesters blocked entrances to two terminals at the port, preventing trucks from entering. Police in riot gear were on hand, but there were no immediate confrontations or arrests.

Workers at the two terminals were told to stay home, the Oregonian reported (http://bit.ly/unRr6l ). Spokesman Josh Thomas said an unspecified number of workers at the terminals wouldn't be paid.

Before the protest began, police made three arrests and seized a gun and a sword from people who said they were on the way to protests. A spokeswoman for Occupy Portland said the armed men are not associated with the group.

"We do not send out folks with guns," Kari Koch said. "We don't plan anything illegal."

The disruption lasted an hour before the protest moved to a second gate, blocking it for less than 30 minutes before moving on.

Organizers of the port demonstrations said they hope to draw thousands to stand in solidarity with longshoremen and port truckers they said are being exploited. The International Longshore and Warehouse Union, however, distanced itself from the shutdown effort.

The union's president suggested in a letter to members that protesters were attempting to co-opt the union's cause to advance their own.

Shutdown supporters said they're not asking longshoremen to organize a work stoppage in violation of their contract. They said they are simply asking them to exercise their free speech rights and stay off the job, in keeping with the union's historic tradition of activism.

Officials at West Coast ports said they have been coordinating with law enforcement agencies as they prepare for possible disruptions. Protesters said police crackdowns in any city will trigger an extension of blockades in other cities as a show of resolve.