Ready For The Post-Incandescent Plant?

The incandescent light bulb is on the way out, regardless of the opposition, so manfuacturers should look for the bright spots in moving on to new technology. 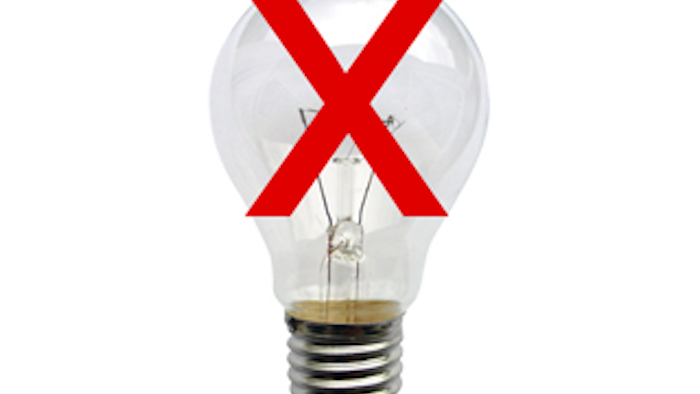 The much-debated “phase-out” of incandescent light bulbs has struck a nerve with consumers and manufacturers alike recently, but the process began long ago, when the Energy Independence and Security Act (EISA) of 2007 was passed into law.

The bill, co-sponsored by 198 representatives, passed the House in January 2007, the Senate in June, and was signed into law on December 19 by President George W. Bush. At its signing, the bill’s purpose was “to move theUnited Statestoward greater energy independence and security, to increase the production of clean renewable fuels, to protect consumers, to increase the efficiency of products, buildings, and vehicles, to promote research on and deploy greenhouse gas capture and storage options, and to improve the energy performance of the Federal Government.”

In terms of lighting, the bill’s requirements are clear: by 2014, all general-purpose light blubs that produce 310 to 2,600 lumens of light must be 30 percent more energy efficient than current A19 incandescent lamps. The first of these mandates, beginning on January 1, 2012, uses the 100-watt incandescent bulb as a baseline for efficiency. Lamps that do not meet the AISA standard will no longer be manufactured or sold.

The EISA mandates have been the subject of a great deal of controversy, so it’s important to make a few points outright. First, EISA 2007 does not target incandescent lamps specifically, as many have been led to believe. There is an indirect mandate, but the 30 percent efficiency requirement merely uses the 100-watt A19 incandescent as a standard. The bill does not disallow incandescent lamps; in fact, these products will still be made, albeit in different forms.

In other words, if a more efficient incandescent lamp is developed, it can be manufactured and sold right alongside the fluorescents, compact fluorescents (CFL) and light-emitting diodes (LED). Halogen lamps, for example, are based on incandescent technology but use a halogen gas—such as iodine or bromine—to help increase efficiency. In addition, some companies have responded directly to EISA and other regulations worldwide with products like the “Halogena Energy Saver,” which uses improved incandescent technology to increase efficiency by 30 percent.

Fluorescent tubes (a much more common source of lighting in manufacturing facilities) will be regulated in the same fashion beginning on July 14, 2012. In 2013, the mandate will begin to affect lamps equivalent to 75 watt incandescents, and in 2014, will affect 60- and 40-watt versions.

By 2020, the goal is to further tighten these restrictions, enforcing a rule that all general-purpose bulbs must produce at least 45 lumens/watt. In comparison, today’s 100-watt incandescent bulb produces between 17 and 18 lumens/watt, while a CFL produces roughly 60 lumens/watt.

By eliminating any lamp technologies at or below the efficiency level of the 100-watt incandescent, the bill aims to reduce in-plant costs, cut demand on the grid, and lower our dependence on foreign fuel sources.

What It Means For Manufacturers

The EISA mandate targets general-purpose bulbs, which might not make much of a difference for many manufacturers. Most facilities use a variety of industrial-strength lighting solutions, such as fluorescent or metal-halide fixtures, and not incandescents, which means they might not be targeted by EISA’s earliest mandates.

For those who still do utilize incandescent lamps in their plant, EISA’s first enforcement will prove to be an important transition that must be thoroughly vetted beforehand. In order to work through some of the associated issues, we sat down with Wayne Callham, Vice President of Energy Efficiency at BlueStar Energy Solutions.

Callham says that, in simple terms, manufacturers will need to move away from incandescent lamps, particularly if they make use of 100-watt bulbs. Stockpiling is an option, but it’s only delaying the inevitable—because those bulbs will no longer be manufactured after Jan. 1, 2012. Replacements will be difficult, at best, to come by.

Incandescent manufacturers will be able to sell their current stocks, and distributors will be able to sell out their inventories, but once they’re gone, they’re gone forever. Callham says that unlike many government regulations, EISA is a kick-start for manufacturers to actually save money and achieve a positive ROI. In order to do so, a few changes are in order on the plant floor.

If a facility has electronic ballast for powering fluorescent tubes, it doesn’t need to be upgraded or retrofitted to supply power to new lamps. If, on the other hand, there’s magnetic ballast strung up along the ceiling, it’s time to make some decisions. Callham says, “You can replace that entire fixture or retrofit the proper components. Retrofitting is the less expensive option, so if your fixtures are in good shape, you can put in new electronic ballast, a clean and high-efficiency reflector system, as well as new sockets, wires, and lamps.”

For facilities that make use of incandescent or halogen lamps, converting to more energy-efficient lamps is an easier process. CFL and LED lamps are both fully compatible with existing sockets, which means a simple relamp is in order. Current LEDs, such as Cree’s XLamp XM-L, offer 1,000 lumens of light (ideal for high-bay lighting) at 100 lumens/watt, which is almost six times more efficient than an incandescent.

By making one of these changes, manufacturers can drastically reduce the amount of energy their lighting uses. According to Callham, “When you convert your incandescent lamp into a compact fluorescent system, you’re going to see a 4-5 times increase in efficiency. So what might have been 13 lumens being produced by a watt of power, that is now something much greater.” In addition, new lighting technologies enjoy a longer lamp life, which means the total return on investment (ROI) arrives much more quickly. If operated at the proper current and temperature, some LEDs can achieve lifetimes of 100,000 hours. In comparison, incandescent lamps are manufactured to last 1,000 hours.

Just how quickly can a new lighting system pay itself off? Well, it depends on a number of variables unique to a given manufacturing facility, such as the need for a backend retrofit as opposed to a simple re-lamp. In simple terms, Callham says with CFLs most companies see a complete ROI in two or three years.

Other technologies, such as LEDs, could offer more substantial benefits, depending on how they’re used. Callham says that one of the benefits of using LEDs, for example, is integrating them into other energy-saving systems, such as motion sensors that turn lights on only when a worker is present, or smart-dimming sensors that gauge the amount of natural light coming into the plant and shine only the necessary amount of artificial light, reducing electrical load to just a few watts.

And for those who doubt the efficacy of these lighting programs, it’s important to note that lighting has long been the lowest-hanging fruit in “green” or sustainable facilities operations. The figures that Callham mentioned aren’t just marketing-speak with a little fudging to make them more appealing, and the high efficiency of new lighting technologies is undeniable.

By upgrading to CFL, HID, or LED lighting technologies, manufacturers will generally protect themselves from the EISA mandates planned for the end of the decade. And if you ask Callham, it’s a wonder that more companies haven’t made these upgrades already. He says, “With lighting, when you calculate the utilities incentives to take some energy off the grid, you’re talking about paybacks of 50 percent. I defy anyone to find a 50 percent return somewhere else that isn’t related to their production.”

Manufacturers can receive additional benefits from not waiting in the form of savings from the power utility company. As mentioned before, one part of EISA is to reduce load on the nation’s electrical grid, and even though power utilities love those monthly payments, they do have something to gain in keeping loads to a minimum, especially during those warm summer months. Many utilities have incentive programs for companies who are able to reduce their needs due to investment in energy-efficient equipment. The environment can vary between states, counties, and even cities, so it’s best to check out a resource like www.dsireusa.org and search for a particular state.

For example, a manufacturer in Wisconsin(where Manufacturing.net is based), can be rebated $25 for each LED fixture purchased (up to 24), and can work with a Focus on Energy agent to get rebates as large as $500,000 based on energy efficiency investments. If the company doesn’t have the necessary capital to retrofit their plant, they can get loans up to $100,000 from the local utilities. Depending on one’s state, the oftentimes frightening initial investment can be partially offset by these incentives, and will certainly help the ROI reach parity as soon as possible.

Many have resisted the EISA mandates on energy efficient lighting due to a restriction on choice in the marketplace. Some lawmakers, most recently Rep. Joe Barton (R-TX), have proposed repealing the original mandates, arguing that the government should not force its citizens to purchase more expensive bulbs when the $0.30 incandescent has served them well for more than a century.

In addition, many have spoken out about the potential dangers of CFLs, which contain mercury, a toxic chemical that could prove to be dangerous if a lamp is broken on the plant floor. Others have said that CFLs and LEDs aren’t capable of producing the kind of light temperature (that yellow glow, compared to white CFLs or LEDs) they desire.

Manufacturing.net, as a conduit between American manufacturers and the news that affects them most, has heard these arguments. In the past, our readers have been vocal about the desire for choice, even if it’s more expensive in the long-haul. Callham has heard these concerns, too. He says, “I think the resistance is to the mandate itself, not the financial benefit. I think when someone’s compelled to do something, they’re going to work against that mandate. That’s human nature.”

Oftentimes, it’s not easy to change one’s ways because a handful of people — which is what Congress is, for better or worse — decide what’s best for all of us. We think it’s great if people want to be vocal about their opinions, but in regulatory matters, it’s equally important to be prepared. January 1 is coming up quick, and even if Barton’s reversal makes its way through Congress, President Obama will almost certainly veto it.

In manufacturing, it’s critical to stay on top of the always-changing regulatory and technological battlefields, and based on the evidence, it seems that manufacturers have little to lose—and some to gain, even—in quickly renovating their facilities to comply with EISA. It’s rare that government regulation can push a business toward an investment with a positive, quick ROI. The traditional incandescent has done its job well, and we should be thanking it as we push it faster toward obsolescence.