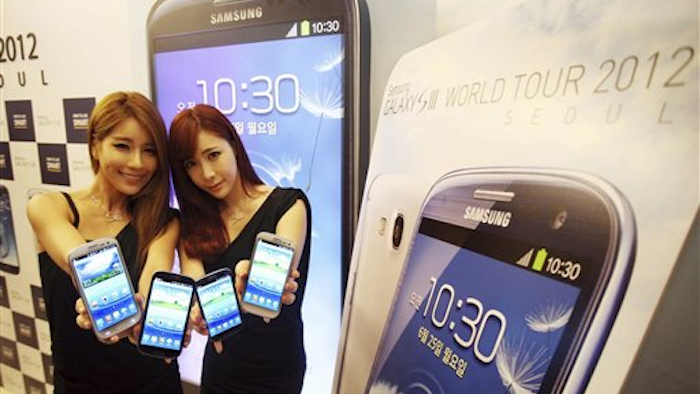 Samsung ramped up its camera technology in last fall's Galaxy Note 4, and the camera is even better in the Galaxy S6 and S6 Edge announced Sunday. More importantly, the new phones have a more stylish design.

I had less than 90 minutes to try out the new phones in controlled settings, so it's too early for a definitive assessment. But I'm impressed with what I've seen so far. The phones will start selling in April, at prices not yet determined.

For years, Samsung phones have had removable backs made of plastic. That allowed for battery replacement, but made the phones look cheap. I'm glad to see the metal frame and glass back in the new phones. The phones are lighter than before, even with metal.

The main S6 model feels boxy in my hands. More recent iPhones have smoother, curved edges. The S6 Edge curves on the left and right sides to create side displays, so it feels better. But boxy or not, I prefer Samsung's new design over its old models.

The Note 4 camera was excellent for producing images rich in color. However, the colors sometimes felt unnatural, especially with indoor shots. The S6 phones seek to fix that by using their infrared sensors (normally used for heart rate tracking) to better detect and adjust for specific lighting conditions. This sounds promising.

The S6 phones also sport better focus, borrowing technology from Samsung's stand-alone NX1 camera. You already can focus on a person by touching that part of the screen. But if the person walks away, the focus is off. With the new technology, the focal point moves with the person. It worked in my limited tests, though the subjects were still blurry because of poor lighting conditions. I may get better results outdoors.

One handy feature: Double tap the home button anytime to open the camera app quickly, so you don't miss shots.

You can no longer replace the battery with a spare, but there's fast-charging technology to get you from zero to 50 percent in a half-hour. Although I didn't get to test this with the S6 phones, a similar feature worked well on the Note 4.

With wireless charging, you can place the phone on a special mat to charge it. No cords needed. This will be handy when coffee shops and restaurants start making these mats available. Until then, I don't mind the cord, especially as wireless charging is slower.

The S6 Edge model has curved sides, similar to last fall's Note Edge phone. The S6 Edge improves on the Note by having the display curve over both the left and right sides. The Note Edge's side display was on the right only, making some features awkward for lefties.

With the S6 Edge, you can assign colors to important contacts — such as red for your spouse. With the phone face down, the side will flash red when a call from your spouse comes in. You can decide without rudely lifting the phone whether you really need to take that call.

When it launches this summer in the U.S. and South Korea, Samsung Pay will let people pay with a tap at retail stores. The service promises to work at more places than Apple Pay because it has backup technology that replicates the magnetic-strip signals on plastic cards. However, based on Samsung's descriptions, Samsung Pay will require a few more steps than Apple Pay at checkout.

The S6 phones have improved fingerprint sensors. Before, you had to swipe down on the home button; the phone wouldn't unlock if you didn't swipe correctly. Now, you simply touch the home button, just as you do on iPhones. The fingerprint ID will authorize mobile payments too.

Samsung also streamlined the software interface. Currently, the menu of additional options is accessed by tapping on the three vertical dots on the top right. Why three vertical dots? Who knows? That's been replaced with the word "MORE."

Little touches like these will help make the phones more accessible to customers.