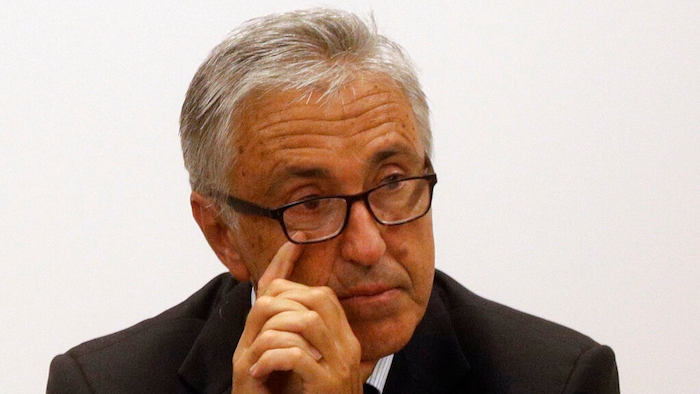 In this Aug. 18, 2018 file photo, Autostrade per L'Italia CEO Giovanni Castellucci attends a press conference in Genoa, Italy. Italian financial police on Wednesday issued arrest warrants against six current and former managers of Italy’s main private highway operator as part of the investigation into the Genoa bridge collapse that killed 43 people in August 2018. Three - including Castellucci - have been put under house arrest as part of a probe into defects in highway barriers linked to the deadly bridge collapse, while another three faced restrictive measures.
AP Photo/Gregorio Borgia

According to financial police, documents have emerged indicating that the six were aware that defective highway sound barriers had been installed in some parts of the company’s vast highway network, and resisted taking action to substitute them or otherwise ensure their safety.

Autostrade said in a statement that the barriers in question were installed on 60 kilometers (37 miles) of the company's 3,000-kilometer network, and that work has already been carried out to secure the barriers after the company became aware of an investigation last December.

Atlantia, which is controlled by the Benetton family, has agreed to exit the company that manages most of Italy’s toll roads and bridges, but terms are still being worked out. The deal avoids the possibility that the government would remove Autostrade’s concessions to run toll highways and bridges throughout the country.

A replacement bridge was opened with much fanfare this summer.