Wisconsin Mill That Exploded Had Been Reprimanded On Safety

A Wisconsin corn mill that exploded late Wednesday night was reprimanded by federal safety inspectors six years ago for not taking precautions against dust explosions, which are a major hazard in handling grain, records show.

MADISON, WI — A Wisconsin corn mill that exploded late Wednesday night was reprimanded by federal safety inspectors six years ago for not taking precautions against dust explosions, which are a major hazard in handling grain, records show.

The blast at the Didion Milling Plant in Cambria, a rural village about 45 miles (72.42 kilometers) northeast of Madison, left at least two people dead. Columbia County Sheriff Dennis Richards confirmed the body of the second worker was found late Thursday afternoon. Emergency crews were still searching for a third worker. Nearly a dozen other employees were taken to area hospitals. None of the workers have been identified.

The cause of the blast remained unknown as of Thursday afternoon, Didion officials said. U.S. Occupational Safety and Health Administration investigators were on the scene.

At a news conference Thursday evening, Cambria Fire Chief Cody Doucette said a smaller fire occurred in a different part of the facility on Monday. Investigators were working to determine whether there was a link between that fire and Wednesday night's explosion, Doucette said.

"The safety and security of our employees is our top priority," Didion Vice President of Operations Derrick Clark said in a news release. "Over the past 44 years, the Didion team has grown to be a close-knit family, and we ask for your prayers during this difficult time."

The plant processes corn for ethanol and other uses. A review of online OSHA records shows the plant was cited in January 2011 for exposing its workers to dust explosion hazards. The records state that plant filters lacked an explosion protective system.

The agency ordered the mill to correct the problem by April 2011. The records show Didion paid a $3,465 fine and the case was closed in September 2013. OSHA hasn't cited the plant for anything since, the records show.

Dust explosions are a serious problem in handling grain, according to the U.S. Agriculture Department. There were five grain dust explosions in the United States last year and two of the incidents resulted in fatalities, Purdue University said in an annual report. Keeping facilities clean of dust and equipment in good working order to reduce the possibility of igniting the dust are critical to preventing explosions, the report said.

Dust explosions can occur when high concentrations of dust particles are suspended in the air in a confined space during grain handling and a spark from something like a cigarette butt ignites it, according to the USDA's website.

Emails sent to several Didion officials Thursday and a voicemail left for Vice President of Sales Jeff Dillon weren't immediately returned. A note posted on the company's website said the company would be closed until further notice.

Nearly two dozen fire departments and four police departments responded. Cambria Village President Glen Williams said the fire was contained by early Thursday and there were no evacuations in the area.

Doucette said some area residents briefly lost power after the blast. Schools in the Cambria-Friesland district also closed Thursday because of the incident.

The district houses early childhood through 12th grade in one building about an eighth of a mile from the plant, Superintendent Timothy Raymond said. School officials wanted to be sure the danger was over on Thursday, he said. Classes were set to resume on Friday.

The number of employees inside the building during the explosion fluctuated through the day Thursday. 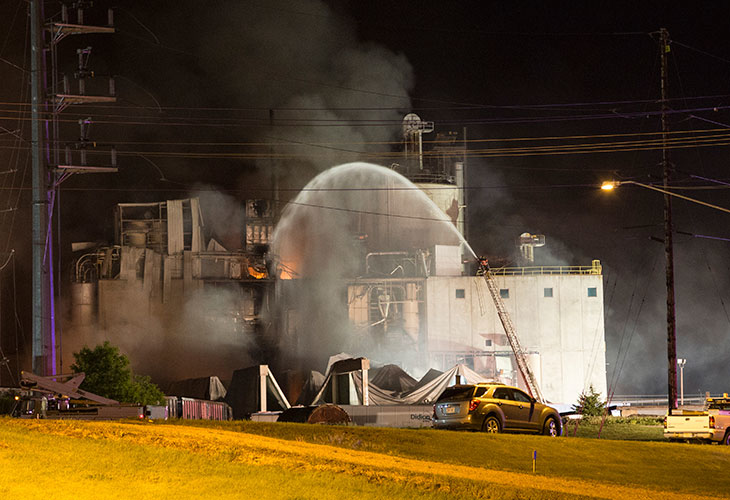 Sheriff Richards initially said 16 people were in the plant. Village of Cambria officials later said 17 were inside before revising the number back to 16.

In addition to the two fatalities, two other plant employees were treated and released. Eleven more were taken to area hospitals via ambulance and helicopter.

Cambria is a community of about 770 people. Williams, the village president, said the plant is an economic anchor for the entire area. Raymond, the schools superintendent, said his district plans to have counselors on hand when students return Friday.

"Quite a few of the employees live in the village and surrounding area. So it's going to affect the whole area. Not just the shock of the event, but the economic hardship to the families," Williams said.

OSHA spokesman Scott Allen said personnel from the federal agency were on the scene Thursday to begin an investigation. The agency has six months to complete its work.

The company employs more than 200 people. It has offices and a soybean plant in Jefferson County to the southwest, the mill and an ethanol plant in Cambria and an oil packaging plant in Green Lake County to the north, according to the company website.

Brothers John and Dow Didion began Didion Milling in 1972 and construction on the Cambria corn mill was completed in 1991, according to the website. The company's corn products are used in brewing beer as well as in making chips, breakfast cereals, bathroom moldings, steel and ethanol.