Three people were killed and four others injured Monday when an explosion launched a boiler the size of a van through the roof a St. Louis box company and slammed much of it down hundreds of feet away in a neighboring laundry business.

ST. LOUIS (AP) — Three people were killed and four others injured Monday when an explosion launched a boiler the size of a van through the roof a St. Louis box company and slammed much of it down hundreds of feet (meters) away in a neighboring laundry business, the fire chief said.

One person died in the blast about 8 a.m. at the Loy-Lange Box Co. and two more were killed when a large piece of the boiler crashed into the Faultless Healthcare Linen building's office area, Fire Chief Dennis Jenkerson said.

Investigators were trying to pinpoint what caused the boiler to explode at the building in a largely industrial area of south St. Louis, Jenkerson said.

Two of four survivors are critically injured, including a linen company worker who was found pinned beneath the boiler, which Jenkerson said was roughly 4 feet in diameter and 10 feet long (1.2 meters in diameter and 3 meters long).

He said the boiler was still hot when rescuers arrived and that it had traveled up to 500 feet (150 meters).

None of the victims' names have been released.

A third building was damaged when a piece of pipe — about 8 feet (2.5 meters) long — linked to the explosion went through its roof, Jenkerson said. 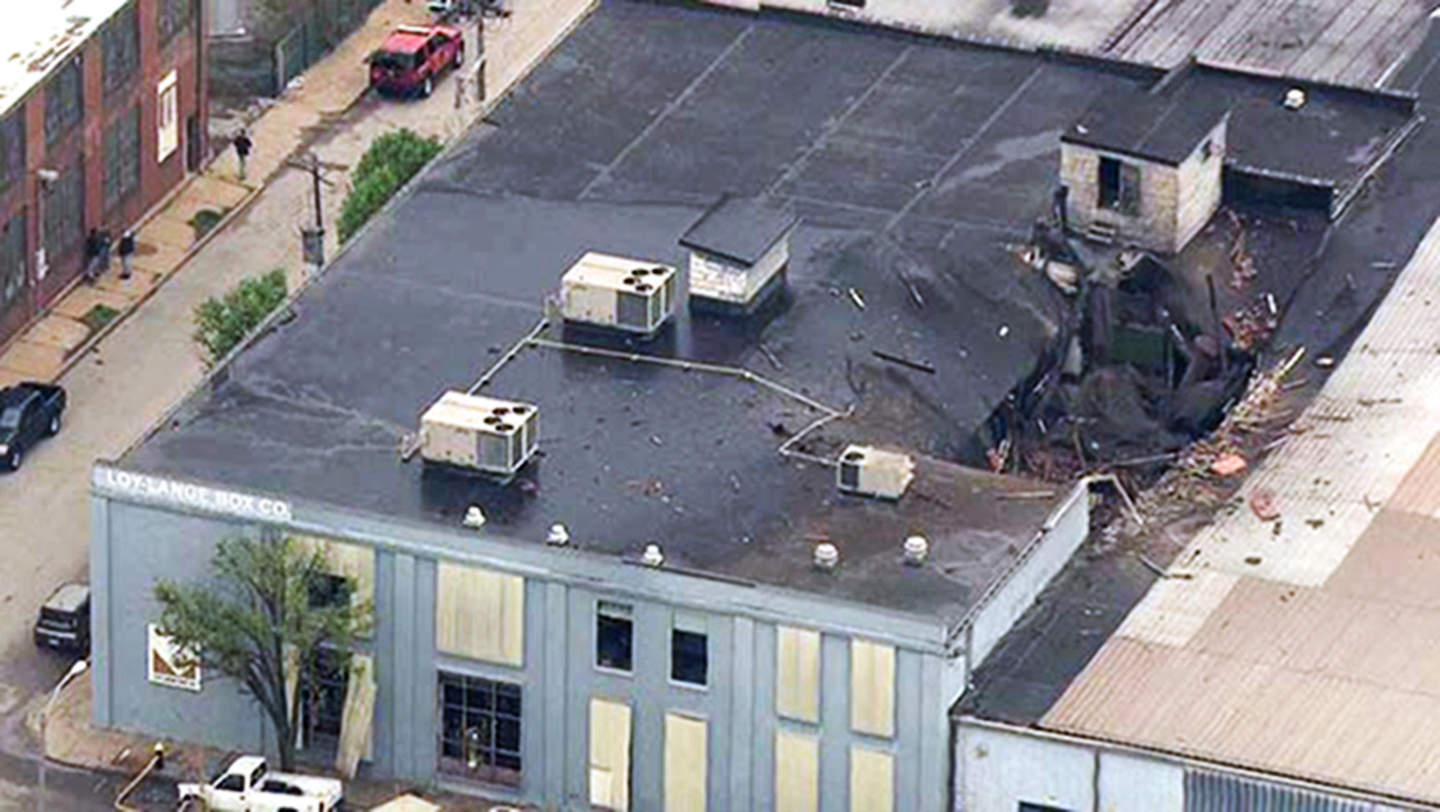 This April 3 photo from video provided by KMOV shows damage to the roof of a box company in St. Louis after a boiler exploded and flew before crashing through the roof of a nearby laundry business. Authorities said several people were killed as a result of the explosion. (KMOV via AP)

While at least initially believing the explosion was accidental, Jenkerson said investigators will seek out and review the boiler's inspection and maintenance records.

It was not immediately clear if anyone was working on the boiler at the time of the blast.

The phone rang unanswered at Loy-Lange Box Co., and an email message by The Associated Press to the company wasn't immediately returned.

The company is described on its website as a "full-service corrugator and custom box manufacturer."

Investigators from the U.S. Department of Labor's Occupational Safety and Health Administration were on the scene. OSHA spokesman Scott Allen said the agency's records show that Loy-Lange was cited last year for an unspecified "general requirement" and paid a $3,741 fine, half of what OSHA initially assessed. It wasn't clear if that citation was related to the boiler or other equipment. No other alleged violations by the company appear in OSHA records since 2000, Allen said.