Low-Allergen Soybean Could Have High Impact

Scientists from the UA and University of Illinois have created a new variety of low-allergenic soybean, and it could make the creation of animal feed more efficient. 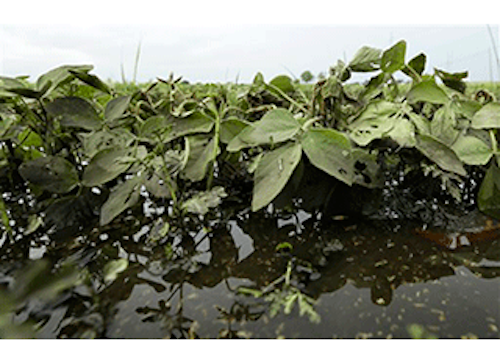 In the United States, nearly 15 million people and 1 in 13 children suffer from food allergy. In Arizona alone, every classroom contains at least two children with a food allergy.

Soybeans are one of the eight foods regulated by the Food Allergen Labeling and Consumer Protection Act, or FALPA. Soybean is a major ingredient in many infant formulas, processed foods and livestock feed used for agriculture. Soybeans contain several allergenic and anti-nutritional proteins that affect soybean use as food and animal feed.

A decade-long effort by University of Arizona scientists Monica Schmidt and Eliot Herman and University of Illinois scientist Theodore Hymowitz has yielded a new soybean with significantly reduced levels of three key proteins responsible for both its allergenic and anti-nutritional effects. The work is described in a paper published online in the journal Plant Breeding.

"We have created a low-allergen and low anti-nutritional inhibitor soybean using conventional breeding methods," said Herman, a professor in the UA School of Plant Sciences and a member of the BIO5 Institute.

Back in 2003, Herman, then at the U.S. Department of Agriculture, made national headlines when he and his colleagues addressed P34 as the soybean's key allergen, and genetically engineered it out of the crop. Although the new soybean may have been less likely to cause allergic reactions, testing was impeded by its transgenic production especially in key applications such as infant formula.

To circumvent the issue, Herman, Schmidt and Hymowitz set out to create a similar soybean using conventional breeding methods. After screening 16,000 different varieties of soybean for the desired trait, they found one that almost completely lacked the allergen P34. The team stacked the P34 null with two varieties previously identified by Hymowitz that lacked soybean agglutinin and trypsin inhibitors, proteins that are responsible for the soybean's anti-nutritional effects in livestock and humans.

"We really believed in this goal and wanted to produce an enhanced soybean that could be used," Herman said. "That became the motivation for using conventional breeding rather than the transgenic approach."

After nearly a decade of crossbreeding each variety to the soybean reference genome called Williams 82, the team has produced a soybean that lacks most of the P34 and trypsin inhibitor protein, and completely lacks soybean agglutinin. Beyond these characteristics, the soybean is nearly identical to Williams 82. They've dubbed the new variety "Triple Null."

"We think this will be embraced by many, whether they prefer conventional breeding or transgenic methods of food production," said Schmidt, an assistant professor in the School of Plant Sciences and a member of the BIO5 Institute. "It can be grown organically, with pesticides, and although conventional itself it could be transformed to add other producer or consumer traits."

In collaboration with scientists at Purdue University, tests are planned to evaluate the efficacy of the low-allergen soybean in swine. The Purdue team has bred a line of swine that develops a strong allergenic response very similar to that of human infants allergic to soybean formula. The swine studies will enable testing of Triple Null and enable new approaches to mitigate soybean allergies in humans.

"Food allergy is a huge and growing problem for children. In Arizona, teachers are required to undergo training in how to respond to an emergency situation where a child has a significant response to an allergen exposure," Herman explained. "We hope this work will offer a new approach to developing low-allergen foods and help to bend down the curve of growing food allergy."

Triple Null also has applications for livestock and agriculture with soybean being the primary global input of vegetable protein for animal feed. A growing use of soybean is in aquaculture, which produces more than 50 percent of consumed seafood, with this number expected to rise to 75 percent by 2030. Before soybean is used in feed, it must undergo a heating process to eliminate anti-nutritional proteins such as trypsin inhibitors and soybean agglutinin that add to cost -- the very components that Herman, Schmidt and Hymowitz have effectively eliminated.

"All over the world, people are consuming more meat," Herman said. "At the current rate, we'll have to more than double the amount of animal feed by the year 2050. This means that several hundred million more tons of soybean will need to be processed before it can be fed to animals." By preemptively knocking out the anti-nutritional components of soybean, the researchers hope Triple Null can eliminate the need for extra processing and make creation of animal feed more efficient, potentially developing a raw soybean as animal feed.

"By the year 2050, animal feed needs are expected to rise 235 percent," Schmidt said. "We're hoping that our soybeans can help with this. It's great to know that they can have an impact."