The Agriculture Department said Wednesday the labels will be required starting in May 2016. Mechanically tenderized meat is poked with needles or blades to make it tender, a process that can transfer bacteria from the outside of the cut of beef to the inside. Since many people eat cuts of meat that aren't fully cooked in the center, that bacteria can pose a safety hazard. 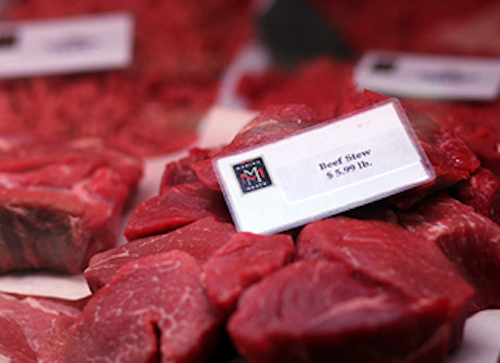 WASHINGTON (AP) — The government will soon require labels on packages of beef tenderized by machines so shoppers know to cook it thoroughly.

The Agriculture Department said Wednesday the labels will be required starting in May 2016. Mechanically tenderized meat is poked with needles or blades to make it tender, a process that can transfer bacteria like E. coli or salmonella from the outside of the cut to the inside. Since many people eat cuts of beef that aren't fully cooked in the center, that bacteria can pose a safety hazard.

The labels will say that the meat has been "mechanically tenderized," ''blade tenderized" or "needle tenderized." They also will include cooking instructions to ensure consumers cook the meat long enough to kill any bacteria.

The Centers for Disease Control and Prevention says there have been six outbreaks of illness linked to mechanically tenderized beef in the last 15 years. USDA predicts that the new labels and cooking instructions could prevent hundreds of illnesses annually.

Meat industry officials say they have worked to make tenderized products safer over the years, and they don't think they need to be labeled. But the North American Meat Institute's Barry Carpenter said USDA worked with the industry on the rules, which were initially proposed in 2013, and they will work to put them in place.

"We are confident in the safety of products that are mechanically tenderized to increase tenderness, a trait that consumers desire in meat products," Carpenter said.

Consumer groups had pushed for the labels for several years. A coalition of those groups praised the new USDA rule, saying consumers don't always know when meats have been tenderized — or that they can be unsafe — because they don't look any different.

PG&E is trying to dig out of a financial hole created by more than $50 billion in claims stemming from a series of catastrophic wildfires.
Michael Liedtke
Jan 23rd, 2020

The man who fell into a vat of acid at his workplace may have had a medical emergency.
Associated Press
Jan 22nd, 2020