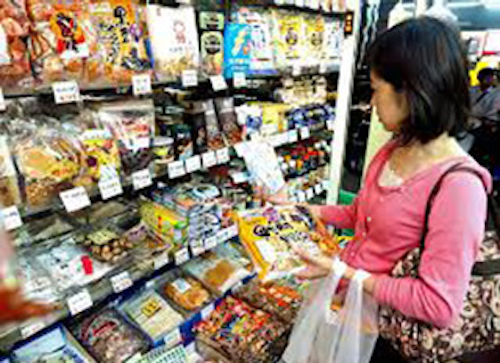 Taiwanese and Japanese officials are working to hammer out a memorandum of understanding following a series of violations of Taiwan's importation ban imposed on Japanese food products from certain prefectures since the 2011 Fukushima nuclear disaster.

Chou Shyue-yow, deputy director general of the Taiwanese Foreign Ministry's Department of East Asian and Pacific Affairs, told a press conference that while Japan and Taiwan have a mechanism in place to allow information-sharing when food safety incidents occur, both sides hope to strengthen it.

"We are working toward the direction of signing an MOU or an agreement to strengthen bilateral cooperation on food safety," he said.

Chou said the two sides established a joint task force in March in the wake of the discovery of foodproduce smuggled from five Japanese prefectures subject to the import ban -- Fukushima, Ibaraki, Tochigi, Gunma and Chiba.

Investigators found that some of the products carried Chinese labels different from the actual place of origin before they entered Taiwan, a practice that is allowed in Japan but considered illegal in Taiwan.

Upset by the matter, a legislative committee passed a motion in late March tightening inspections onfood products imported from Japan.

Under the new measure that came into force on May 15, food products imported from Japan must carry prefecture-specific labels of origin, and some food products from certain prefectures must carry documents proving they passed radiation checks.

Japan has been criticizing Taiwan for failing to base the measure on scientific grounds and has asked the island's government to reverse its decision.

Through the assistance of the joint task force, Taiwanese authorities obtained information from Japan and discovered that two dozen Taiwanese companies have imported food products from the banned prefectures.

Apart from asking Taiwan to reverse its decision on the tougher restrictions, Japan has also been urging Taiwan to lift the importation ban on the five Japanese prefectures.

Minister of Health and Welfare Chiang Been-huan revealed in March that the ministry was studying the possibility of lifting the ban at the request of the Japanese government.

While Taiwan has agreed in principle to phase out the ban by allowing the import of certain foodproducts from four Japanese prefectures subject to the ban, authorities said there is no timetable set for when the new measure will come into force.

Chou said Tuesday that while the Ministry of Health and Welfare is in charge of the negotiations, he wants to point out that it is an "international trend" for countries to either lift the importation ban or relax their restrictions.

Countries that still have the importation ban in place forbid only certain food products rather than impose a blanket ban, he said.