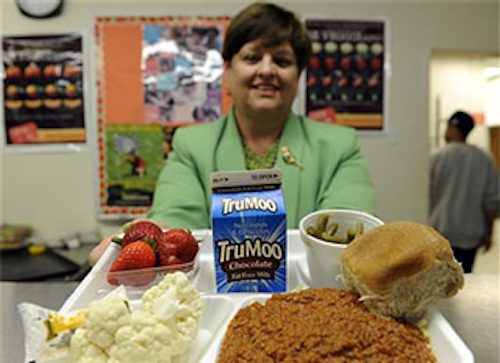 "Our survey found that people in the U.S. overwhelmingly support strong nutrition standards and believe school meals are healthier and on the right track because of these standards," said La June Montgomery Tabron, president and CEO of the W.K. Kellogg Foundation.

"Today, 67 percent of Americans say the nutritional quality of food served in public school cafeterias is excellent or good, which is up 41 percent from a national survey we conducted in 2010, before the standards were adopted," she said.

The survey shows people in the U.S. believe the nutrition standards are instrumental in maintaining and improving the nutritional quality of school food and supporting children's health:

"Kids eat what they know – and today more than 23 million students are learning about healthy food and local farms in the classroom and cafeteria through farm to school activities," said Anupama Joshi, executive director of the National Farm to School Network. "Farm to school not only has a significant impact on building a generation of healthy eaters, but also creates economic opportunities for farmers and support vibrant communities. It is so exciting to see the broad public support for this win-win approach."

The survey showed strong support for healthy practices both in and out of school settings.

Nine out of 10 people surveyed said the federal recommendations known as the Dietary Guidelines for Americans should promote water as a preferred beverage choice. Even more – 91 percent – said ensuring kids have access to safe drinking water and encouraging them to consume more water is the number one or a high priority for improving the health and well-being of students.

"We're learning that kids' need for water is often overlooked or taken for granted," Montgomery Tabron said. "It shouldn't be. Good hydration improves cognitive function, and recommending water as the beverage of choice can help in the fight against childhood obesity."

Additionally, 84 percent of those surveyed said they strongly or partly agree that sustainable agriculture should be part of the Dietary Guidelines for Americans.

Complete poll results are available online at wkkf.org/2015SchoolFoodPoll. The poll is being discussed on social media with the hashtag #keepourkidshealthy.