While reliance on food banks exploded when the economy tanked in 2008, groups said demand continues to rise year after year, leaving them scrambling to find more food. 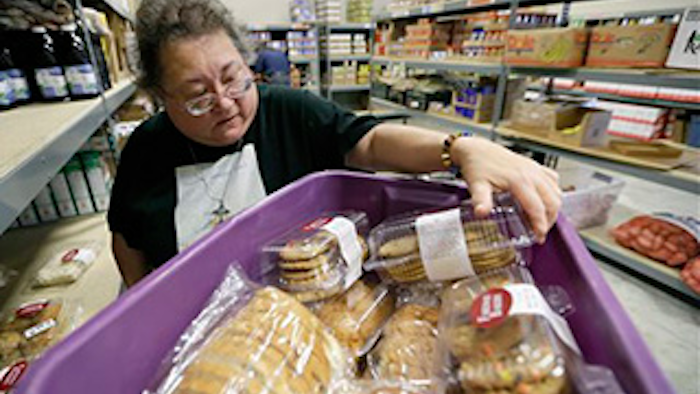 DES MOINES, Iowa (AP) — Food banks across the country are seeing a rising demand for free groceries despite the growing economy, leading some charities to reduce the amount of food they offer each family.

U.S. food banks are expected to give away about 4 billion pounds of food this year, more than double the amount provided a decade ago, according to Feeding America, the nation's primary food bank network. The group gave away 3.8 billion in 2013.

While reliance on food banks exploded when the economy tanked in 2008, groups said demand continues to rise year after year, leaving them scrambling to find more food.

"We get lines of people every day, starting at 6:30 in the morning," said Sheila Moore, who overseesfood distribution at The Storehouse, the largest pantry in Albuquerque, New Mexico, and one wherefood distribution has climbed 15 percent in the past year.

Across the country in Gloucester, Massachusetts, The Open Door food pantry has given away 7.6 percent more food this summer than last, said the organization's executive director, Julie LaFontaine.

"There's always a real hustle and bustle," she said. "People coming and going."

James Ziliak, who founded the Center for Poverty Research at the University of Kentucky, said the increased demand is surprising since the economy is growing and unemployment has dropped from 10 percent during the recession to 5.3 percent last month.

However, many people who have found jobs are working only part-time or for low wages, and others have stopped looking for work.

The drop in food stamp rolls by nearly 2.5 million people from recession levels could be contributing to the food bank demand, he said, because people who no longer qualify for the government aid may still not earn enough to pay their bills.

According to the U.S. Labor Department, wages and salaries rose only 0.2 percent in the second quarter of the year.

Feeding America spokesman Ross Fraser said a recent study by his organization estimated that 46 million people sought food assistance at least once in 2014.

Feeding America, which coordinates large food donations for 199 food banks nationwide, has seen donations of food and money to the Chicago-based organization climb from $598 million in 2008 to $2.1 billion in 2014. The group coordinates donations from larger retailers, like Walmart, while localfood banks also seek food from smaller businesses and buy groceries with donated money.

Lisa Hamler-Fugitt, executive director of the Ohio Association of Food Banks, who has been working infood charities since the 1980s, said that when earlier economic downturns ended, food demand declined, but not this time.

"People keep coming earlier and earlier, they're standing in line, hoping they're get there before thefood runs out," Hamler-Fugitt said.

In Iowa, two years of 20 percent increases in demand forced the Des Moines Area Religious CouncilFood Pantry Network on Aug. 1 to reduce the food given out at its 12 pantries from a four-day supply to three.

"The economy is really not getting better for low-income people," Rice said.

That includes Peggy Bragg, 56, of Des Moines, who has been out of work for months. Bragg, who lives with her daughter, says the pantry bridges the gap for four or five days a month when no money is left for food.

"I know what people go through," she said. "You have to choose between food and bills."

In Fort Smith, Arkansas, the monthly food giveaways at a local park by the River Valley Regional FoodBank draw about 1,000 families.

"When people are willing to stand in 100 degree weather for hours, that tells you something," said Ken Kupchick, the food bank's marketing director.

Demand is growing even in areas with booming economies, such as Austin, Texas.

Hank Perrett, president and chief executive officer of the Capital Area Food Bank of Texas, said the influx of new residents has been part of the problem, pushing up housing prices. Low-skill jobs often pay $10 an hour or less.

"It's impossible to live that way in Austin, Texas," said Perrett, whose group has doubled the size of its operation to meet the surging demand.

Emptier streets may be encouraging drivers to flout traffic safety laws.
May 20th, 2020
Follow Us
Most Recent