A Look at the Changing Landscape of Childhood Obesity

Is the anti-obesity message finally getting through? While a recent report has provided a glimmer of hope, both adult and childhood obesity rates have been flat in the past decade, and dietitians, weight experts and doctors warned that the problem is not going away. 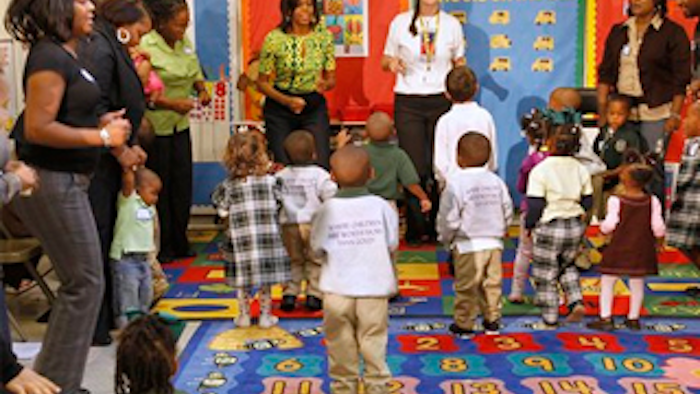 NEW YORK (AP) — Is the anti-obesity message finally getting through?

A marked drop in the obesity rate among preschoolers in the U.S. has researchers and parents pointing to a variety of possible factors.

Among them: public-awareness campaigns to get parents to serve healthier food to their children; a drop in soda consumption; healthier menus at fast-food chains; more access to fruits and vegetables in some neighborhoods; changes in government food aid; and longer breast-feeding, which is often associated with improved weight control.

"We're not done yet, but this does show that parents really need to be the commanders of their own ship and manage the food environment for their kids at home," said Keith Ayoob, a registered dietitian and associate professor of pediatrics at Albert Einstein College of Medicine in the Bronx.

The glimmer of hope was contained in a government report issued Tuesday that showed that the obesity rate among children 2 to 5 years old dropped by nearly half over a decade, from 14 percent to 8 percent. That is encouraging in part because obese preschoolers are more likely to be obese as they get older.

Overall, though, both adult and childhood obesity rates have been flat in the past decade, and dietitians, weight experts and doctors warned that the problem is not going away.

"This is the problem of our generation. We are starting to make some progress, but there's really still a lot more to do," said Scott Kahan, an obesity treatment and prevention specialist and public health researcher at George Washington University.

For example, while first lady Michelle Obama's "Let's Move" campaign and other efforts over the past 10 years have raised awareness, stumbling blocks remain for the poor and for working parents.

"They know their children should be more active, but it's hard for them to get them to the park. They're tired, and it's complicated," said Sarah Barlow, director of the Center for Childhood Obesity at Texas Children's Hospital in Houston and an associate professor of pediatrics at Baylor College of Medicine. "It's an ordeal to get out of the house."

Here's a look at the changing health-related landscape that may have contributed to the drop in preschool obesity:

Sherlyn Pang Luedtke, a parenting coach, said parents can improve their children's eating habits, even if their own were less than stellar.

"I was raised eating fried eggs and rice almost every day for breakfast," said Luedtke, who grew up near downtown Los Angeles and now lives in the suburban San Fernando Valley.

She and her husband have a 9-year-old son and a 4-year-old daughter, and the family sticks mostly to vegetarian fare.

"We have smoothies with greens, flaxseed and blueberries with breakfast. We eat whole-grain products," she said. "We feel great about our health choices that we model for our kids."

Lyndsay Meyer is a first-time mom of a 16-month-old son, living just outside Washington, D.C. She and her husband have not fed their child any processed sugar. His first birthday cake was made with bananas and applesauce. They feed him only whole foods and try to stick to organic ones.

"It's growing increasingly difficult, though, as he makes friends and goes to parties or on play dates," she said. "It's also difficult to go out with him because most places don't offer good, healthy food for toddlers."

Consumption of carbonated soft drinks has been in decline in the U.S. since 2005, said John Sicher, editor and publisher of the news and data service Beverage Digest. It has decreased from 10.2 billion cases a year to 9.2 billion.

In 2004, the average American drank 52.4 gallons of carbonated soft drinks a year. In 2012, that was down to 43.8 gallons. Consumption of bottled water has grown consistently over that period.

McDonald's, Dunkin' Donuts and other chains have changed their menus in recent years. They haven't stopped serving Big Macs and french fries, but they are offering more foods to appeal to health-conscious diners, such as apple slices in Happy Meals, egg whites for breakfast sandwiches and whole-grain bread.

(Many restaurants over the past decade have also eliminated artificial trans fats, but that's because they clog arteries. It is not clear to what extent they contribute to obesity.)

Changes in the federal Women, Infants and Children program, which provides food vouchers for the poor, may also be encouraging healthier eating. The changes — instituted in 2009 — eliminated juice from infant food packages, provided less saturated fat and made it easier to buy fruits and vegetables.

Women are breast-feeding their babies longer, according to government figures. And some researchers believe breast-feeding helps children regulate their intake of food, thereby lowering their risk of obesity later on.

Of infants born in 2010, 49 percent were breast-feeding at 6 months, up from 35 percent in 2000. The breast-feeding rate at 12 months increased from 16 percent to 27 percent during that time period.

Judy Dodd, a University of Pittsburgh assistant professor in nutrition and dietetics, said government programs and other services have encouraged breast-feeding by providing free or low-cost breast pumps, access to refrigeration and more offices with private, comfortable rooms where new moms can pump on the job.

"When a woman goes back to work, how does she continue to breast-feed? That's the biggest challenge I'm hearing, and there have been improvements," Dodd said.

A number of programs are giving people in poor neighborhoods more access to fresh and affordable fruits and vegetables.

For example, the Sproutin' Up program in Fort Collins, Colo., provided 2,500 pounds of locally grown produce for free to poor families last summer and will be back this year. Kids help grow the produce and run the farmers markets, telling their neighbors, "You have to try these! We grew these!"

"Everything is delicious, and there is a lot of variety," Marina Lopez, whose 11-year-old son Victor helps out with the program, said in Spanish through a translator, mentioning carrots, cucumbers and squash. "It's very important for parents to get involved with nutrition for their families."