A major supermarket chain said Friday it is removing all eggs from sale in its German stores amid a scare over possible pesticide contamination that Dutch producers fear will cost them millions of euros in lost income. 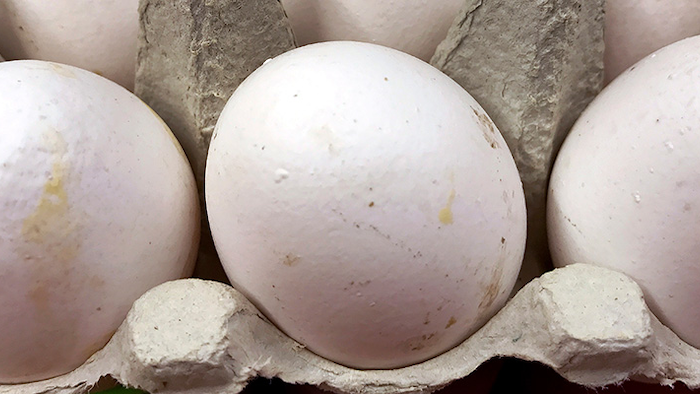 Eggs are photographed in a supermarket in Frankfurt, Germany, Friday, Aug. 4, 2017. A major supermarket chain is removing all eggs from sale in its German stores amid a scare over possible pesticide contamination. (AP Photo/Michael Probst)

THE HAGUE, Netherlands (AP) — A major supermarket chain said Friday it is removing all eggs from sale in its German stores amid a scare over possible pesticide contamination that Dutch producers fear will cost them millions of euros in lost income.

Aldi said the move was a "purely precautionary measure" and there's believed to be no health risk. It said that, effective immediately, it will only accept eggs that have tested negative for the pesticide Fipronil.

The scare, which originated in the Netherlands and Belgium, has drawn growing attention in neighboring Germany. Germany's agriculture minister and the European Commission both have said the situation is under control.

Aldi and rival Lidl had already taken eggs from farms under suspicion of Fipronil contamination off the shelves. Two other German supermarket chains, Rewe and Penny, have stopped selling all Dutch eggs.

The German Farmers' Association described Aldi's decision to take eggs off the shelf as "an excessive reaction at this point in time." It said that the Dutch disinfectant that is at fault was used in relatively few German farms, and they were closed and checked at the end of July.

Dozens of farms are being checked in the Netherlands, and Belgium's food safety agency is probing how Fipronil might have entered eggs destined for supermarkets. Fipronil is banned in products for treating animals like chickens that are part of the human food chain.

The Netherlands exports some 5 billion eggs to neighboring Germany each year, said Hennie de Haan, chairwoman of the Dutch union of poultry farmers.

"We hope that German consumers will start trusting and eating our eggs again, otherwise this disaster will be immeasurable," De Haan said in a telephone interview.

"We hope we can win back the trust of German consumers very quickly because we carry out more tests than probably anywhere else in the world so we actually have very safe eggs," she added.

Dutch supermarkets also have removed millions of eggs from their shelves in recent days.

According to the Netherlands Food and Consumer Products Authority, the current health scare began in June when Fipronil was discovered in an egg farm in Belgium. It spread to the Netherlands in July when seven poultry farms also were found to be tainted with the insecticide.

Dutch authorities say the Dutch and Belgian farms had all been visited by the same poultry service company, which treated the hens against blood lice.

Dutch authorities have since carried out checks on nearly 200 farms and found that only one farm's eggs contained so much Fipronil that they constituted an "acute" health risk and should not be eaten. Dozens more produced eggs that the authority said should not be eaten by children.