The runoff from the fire-fighting efforts carried pesticides and petroleum additives into nearby creeks. 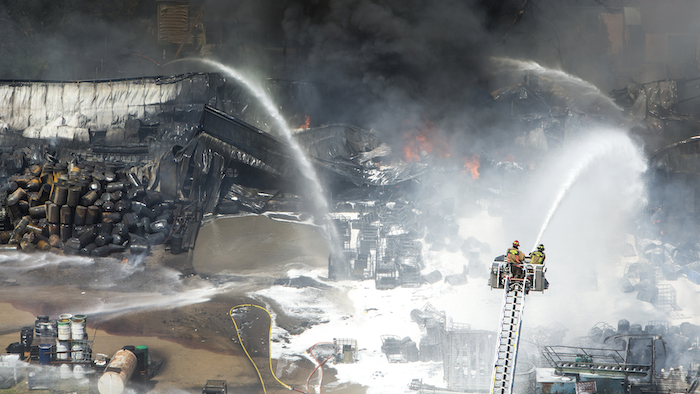 HOUSTON (AP) — A large blaze at a warehouse complex in Houston on Thursday caused explosions, forced the evacuation of hundreds of students from a nearby elementary school and led to the contamination of nearby creeks with pollutants.

The fire that generated towering plumes of black smoke began around 10 a.m. in a home in the Spring Branch section of west Houston. The blaze spread to the nearby warehouse complex, engulfing several businesses there in flames, including Custom Packaging and Filling.

Nearly 200 firefighters battled the fire at its height, but by Thursday afternoon, the blaze was under control and the focus was on extinguishing hot spots.

Authorities have not said what they believe started the fire, which involved at least three structures.

The runoff from the fire-fighting efforts carried pesticides and petroleum additives into nearby creeks, according to a Houston Fire Department statement.

Environmental contractors were containing the petroleum additives Thursday at several points along Spring Branch Creek, but the pesticides are water-soluble and cannot be contained or removed from the creek's waters, according to the statement.

However, the waters in the creeks and bayous nearby remained high because of recent heavy rains and floods, and officials expected that will help dilute the pesticides and minimize their effects, fire officials said.

Officials are warning the public to avoid the affected areas of Spring Branch Creek and ditches, canals and culverts until further notice.

Telephone and email messages to Custom Packaging and Filling from The Associated Press drew no response Thursday.

An alert ordering people in nearby homes and businesses to stay inside, close all windows and shut off air conditioning was lifted about 2 p.m. Fire officials also are warning the public to avoid water runoff in areas near the fire until environmental officials determine no hazard existed, according to a fire department statement.

About 650 students and 80 staff members at a nearby elementary school were taken by bus to an indoor arena located about seven miles away.

"Right next to (the fire) was Spring Branch Elementary, and we needed to get those kiddos out," said Chuck Brawner, police chief with the Spring Branch school district. Brawner said the elementary school was the only school in that area.