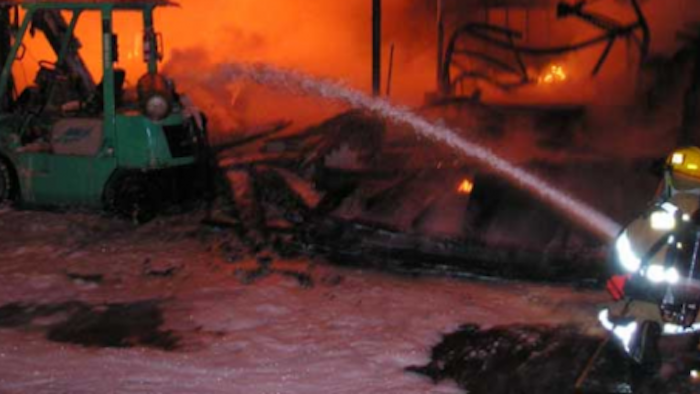 This week was “National Forklift Safety Day,” and to mark the occasion, Toyota re-posted a blog detailing the dangers of fueling a forklift and goofing off on the job.

Here’s the scenario: You’re doing routine service on a forklift in a warehouse. It’s cold, so the doors are closed and there’s a heater on the floor on nearby. You’re refilling the forklift’s tank when a co-worker sneaks up on you and startles you for fun. You jump and drop the gas can on the floor.

Then, while arguing about who has to clean up the mess, gasoline trickles across the floor and toward the heater. Before you can stop it, a fire starts starts.

What do you do?

A) Nothing. A gasoline fire will have to burn out on its own.

B) Grab a hose and douse the fire in water.

C) Find the nearest fire extinguisher to combat the blaze.

SCROLL DOWN TO SEE THE BEST ANSWER.

This may seem like a no-brainer, but the employees involved in this real-life tale actually went for the water hose. In the heat of the moment (pun intended), it probably felt like the most natural way to fight the fire. The only problem is that with flammable liquid fires, water only makes the situation worse.

As soon as the employees sprayed the blaze with water, the fire quickly grew and spread. By that time, the fire was too big to be put out with an extinguisher.

The employees called the fire department, but ultimately, four vehicles and part of the roof were destroyed. Luckily, no one was hurt.

Check out Toyota’s full blog post for tips on how to avoid fires when working with flammable liquids.

Have a real-life Worst Case Scenario story to share? Get in touch! Reach out to the editor: meagan.parrish@advantagemedia.com.