A commercial fire in the Los Angeles area was doused after explosively feeding on 10,000 pounds of magnesium shavings. 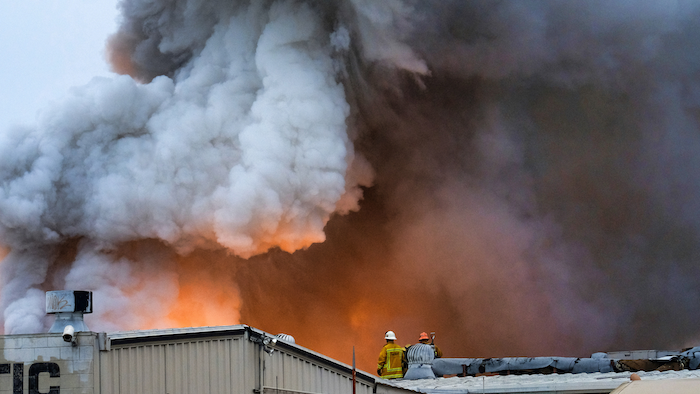 MAYWOOD, Calif. (AP) — A commercial fire in the Los Angeles area was doused after explosively feeding on 10,000 pounds of magnesium shavings, but officials were making sure conditions were safe before allowing some 300 people back into homes they had evacuated.

The plant also contained lead and other metals and chemicals, and it sent up a huge cloud of smoke over the neighborhood in this city of 28,000 south of downtown Los Angeles. Crews Wednesday evening were testing ash and residue in the neighborhood to make sure they didn't pose a health hazard.

There were huge, fireball-like explosions early Tuesday when firefighters poured water on the flames at a metal-recycling warehouse.

"We are now at the point of final extinguishment," said Deputy Chief John Tripp of the Los Angeles County FireDepartment.

Firefighters used heavy equipment to clear debris to expose the remaining magnesium to air so it would burn better. That allowed firefighters to pour in water and make progress, Tripp said.

The tests were expected to take several hours, and once the all-clear was given, evacuees could begin returning home, fire officials said.

"It could have burned down the whole block," Tripp said. "The people that we evacuated — it wasn't for a health reason. We were in fear that that fire was going to burn down their homes," Tripp said.

More than 130 of the 300 or so evacuees spent the night at a Red Cross shelter.

Investigations were underway into the cause of the fire and whether the business met all the extensive regulations for hazardous materials.

The fire was the second major blaze in the Los Angeles area in recent days. Authorities say a dispute between homeless people living together in an abandoned office near downtown LA led one of them to set a fire that killed five others. Johnny Sanchez, 21, was arrested on suspicion of murder for starting the fire, Los Angeles police said. It wasn't immediately clear if he has hired a lawyer.