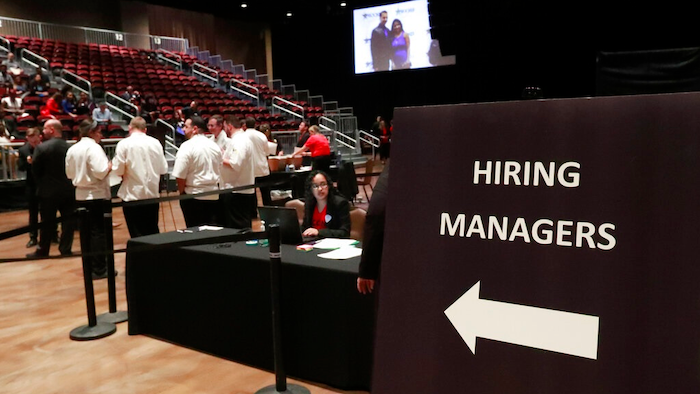 In this Tuesday, June 4, 2019, file photo, managers wait for job applicants at the Seminole Hard Rock Hotel & Casino Hollywood during a job fair in Hollywood, Fla. U.S. businesses added 183,000 jobs in Jan. 2020, a solid gain that shows the economy was largely healthy when the coronavirus outbreak spread further around the globe. Large companies added roughly two-thirds of the jobs, while hiring among smaller firms was relatively weak. Manufacturing and mining firms shed jobs, while hiring in health care and hotels and restaurants was strong.
AP Photo/Wilfredo Lee, File

WASHINGTON (AP) — U.S. productivity rebounded in the final three months of last year but by a smaller amount than initially reported, while labor costs increased at a slower pace than first thought.

The Labor Department said Thursday that productivity grew at a seasonally adjusted annual rate of 1.2% in the fourth quarter. That was down slightly from an initial estimate of a 1.4% gain but still an improvement over a productivity decline of 0.3% in the third quarter.

Labor costs were up at a rate of 0.9% in the fourth quarter, lower than the 1.4% gain reported a month ago, but an acceleration from a tiny 0.2% increase in the third quarter.

While the current economic expansion is the longest in U.S. history, now in its 11th year, growth in productivity has lagged significantly, raising concerns about prospects for future gains in living standards. But there is hope that the recent slight productivity uptick may lead to better results in the future.

Productivity, the amount of output per hour of work, is a major ingredient in rising living standards because it allows employers to pay higher wages funded by the increased output.

Rising productivity along with growth in the labor market are also the two factors that determine the economy’s long-run ability to grow. Growth in the gross domestic product has been the slowest in this recovery of any in the post-World War 2 period.

President Donald Trump blamed that weakness on the Obama administration’s failed economic policies but so far, he has not been successful in making significant gains in GDP growth.

From 2000 to 2007, the year the Great Recession began, annual productivity gains averaged 2.7%. However, since that time, productivity has slowed to just about half of that pace, rising at an average annual rate of 1.4% from 2007 through 2019.

While economists have offered various theories on why the slowdown occurred, they can’t agree on a single culprit. But some have expressed hope that a recent modest acceleration in productivity may be the start of stronger gains in the future.

In a separate report, the Labor Department said Thursday that applications for unemployment benefits fell by 3,000 last week to 216,000. These applications, which are a proxy for layoffs, have been at very low levels for more than two years, indicating the strength of the labor market.

However, the weekly data has taken on more significance with economists saying a jump in layoffs would be an early indicator that the coronavirus is having an impact on the U.S. economy.

The Federal Reserve on Tuesday slashed its benchmark interest rate by a half-point in an effort to calm financial markets which had suffered their worst week since the 2008 financial crisis. The rate cut was the largest since 2008 and the first move between meetings since that time.

Analysts have said the Fed may feel the need to cut rates further at its meeting later this month, especially if financial markets remain turbulent due to fears about what the spreading virus.

The government on Friday will issue the jobs report for February report with the expectation that employers added a strong 175,000 jobs last month with the unemployment rate dipping back to a 50-year low of 3.5%.