But he stopped short of allowing the bankrupt company's CEO to receive a planned $1.3 million payout. 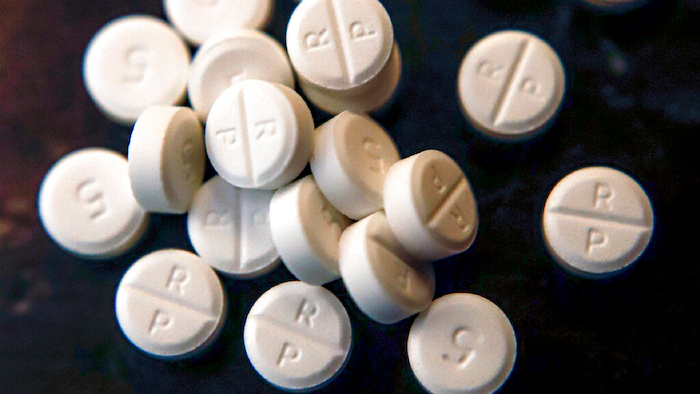 This June 17, 2019, file photo shows 5-mg pills of Oxycodone. The judge overseeing the bankruptcy case of OxyContin maker Purdue Pharma will consider Wednesday, Dec. 4, 2019 whether the company's CEO should get a bonus equal to half his $2.6 million salary.
AP Photo/Keith Srakocic, File

WHITE PLAINS, N.Y. (AP) — More time is needed to sort out whether the CEO of OxyContin maker Purdue Pharma should receive a $1.3 million bonus next year, but the company should be allowed to pay about $35 million in bonuses to 682 other employees, the judge overseeing the company's bankruptcy case said Wednesday.

There were objections at the hearing only to payments to CEO Craig Landau and a group of nine other upper-level “insider” employees. State governments and a watchdog committee didn't dispute the company's contention that bonuses would be needed to keep employees working and the company running — especially after the company agreed to trim many of the bonuses.

Judge Robert Drain said he would sign an order for all the employees except Landau to get bonuses next year. He said it would contain a provision that it could be withheld from anyone found liable in lawsuits over the toll of the opioid crisis linked to more than 400,000 deaths in the U.S. since 2000.

Purdue, based in Stamford, Connecticut, is in bankruptcy court as part of an effort to settle more than 2,700 lawsuits it's facing over the toll of opioids.

Drain said officials with the company and other interested parties should continue to discuss whether it's appropriate for Landau, who has run the company since 2017, to receive a performance bonus on top of his $2.6 million base salary.

Drain said on the bench that he wasn't especially moved by the contention from a group of 24 states that Landau should have his pay docked because of a possibility that he could be held liable in the future.

But he said he was concerned when it was revealed at the hearing that the CEO's base salary was doubled in 2018 shortly after the company hired a law firm to consult on filing for bankruptcy — and that the same year, he received $6 million of the $12 million in retention payments that he had been scheduled to get from 2020 through 2026.

Purdue lawyer Marshall Huenber said those changes were not a tricky move to pay the CEO more with the possibility of bankruptcy looming but rather part of bigger changes to his compensation that includes a reduced severance package if he leaves the Stamford, Connecticut-based drugmaker.

In the hearing, Landau's lawyer, Linda Imes, said Landau, a medical doctor who joined Purdue in 1999 and became CEO in 2017 after a stint running its Canadian sister company, was behind a decision last year to stop marketing opioids to doctors.

“Dr. Landau is a star, and he is a star that Purdue should have working for it in this challenging time," she said.

In their lawsuits, Colorado and Massachusetts allege that Landau blamed the dangers of opioids on patients rather than the drugs and that he knowingly put patients at risk by having his sales team encourage more prescribing of the drug without disclosing the addiction risks.

They say he pushed opioids for elderly patients and those who had never taken them before without disclosing their risks, falsely claimed that a version of OxyContin that was reformulated to make it harder for people to break down and misuse was safe, and pushed doctors to prescribe opioids for a longer period of time.

“Purdue should not award bonus payments to Landau before resolving the allegations that Landau committed deadly, illegal misconduct,” those states and others said in a filing this week.

Purdue and Landau deny the claims. In court filings, Landau said he had no role in overseeing sales or marketing for much of his career at the company.

Whether troubled companies should be allowed to pay bonuses to executives and other critical employees is a common topic debated during bankruptcy proceedings. In 2009, a judge ruled that Lehman Brothers, the investment bank, could pay 230 traders bonuses totaling $50 million to keep working through that company’s bankruptcy. This year, a judge approved paying rank-and-file workers for Pacific Gas & Electric Corp. $235 million in bonuses but nixed millions in extra pay for top executives.

In Purdue's case, the company says two dozen employees have resigned since it filed for bankruptcy in September and that replacements are hard to find.

“Purdue continues to be a difficult place to work, and retaining and motivating Employees continues to be a challenge,” chief financial officer Jon Lowne said in a court filing this week. “In recent weeks, Employees have received an unprecedented barrage of calls from recruiters.”

Court: Testimony From OxyContin Maker Must be Unsealed