Samsung is buying mobile-payment startup LoopPay as the Korean phone maker steps up to challenge Apple and its payment system on iPhones. 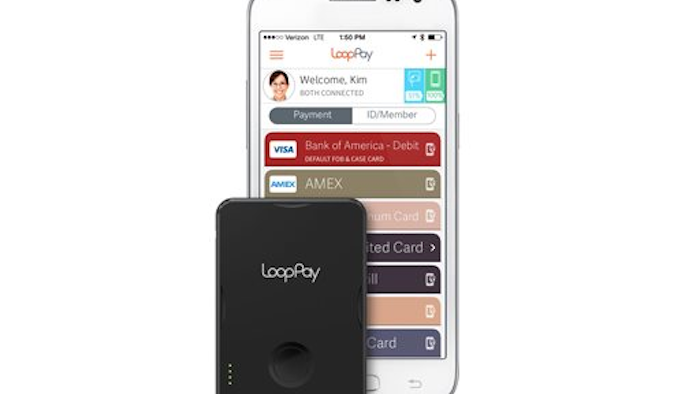 NEW YORK (AP) — Samsung is buying mobile-payment startup LoopPay as the Korean phone maker steps up to challenge Apple and its payment system on iPhones.

The deal strengthens speculation that Samsung Electronics Co. plans to include mobile-payment technology in its next major phone, which is expected to be announced March 1 at the Mobile World Congress in Barcelona.

Launched a year ago, LoopPay works by reproducing the signals from a credit card's magnetic swipe as users tap a LoopPay device next to a retailer's card reader. That means LoopPay should work with most retailers' existing payment terminals.

Most other mobile-payment systems, including Apple Inc.'s Apple Pay, require newer terminals with wireless chips called near-field communication, or NFC. That limits the number of retailers that can accept such payments.

But LoopPay has had trouble with some older readers; restaurants and bars often couldn't process LoopPay transactions due to a variety of hardware and software issues. It also doesn't work with transit fares, parking meters and other machines that require the customer to fully insert a card, like a bank ATM.

Plus, it's not clear what will happen when merchants hit an October deadline for accepting cards with stronger security known as EMV, as LoopPay offers only the basic magnetic signals. NFC and Apple Pay equipment is newer and enabled for EMV. LoopPay is more of a retrofit — for a system being phased out.

Nonetheless, Samsung sees enough potential to buy the company. LoopPay estimates that its system works with 90 percent of merchants. Although there are more than 200,000 payment terminals in the U.S. that can accept NFC, that's out of several million.

"Our goal has always been to build the smartest, most secure, user-friendly mobile wallet experience, and we are delighted to welcome LoopPay to take us closer to this goal," said JK Shin, head of Samsung's mobile division.

The companies didn't disclose financial terms or say when the transaction will close. LoopPay will continue to operate in Boston as a wholly owned subsidiary of Samsung.

So far, LoopPay has been available as accessories for iPhones and Android devices. Ownership by Samsung raises the prospect of shipping phones with LoopPay built in, a move that would expand the service's reach. The companies didn't say whether they will continue making the LoopPay accessories for non-Samsung devices.