Manufacturers are crafting high-resolution, curved screens for desktops and other new features you can't get in a hand-held device, while trying new laptop designs that mimic the tablet's appeal. 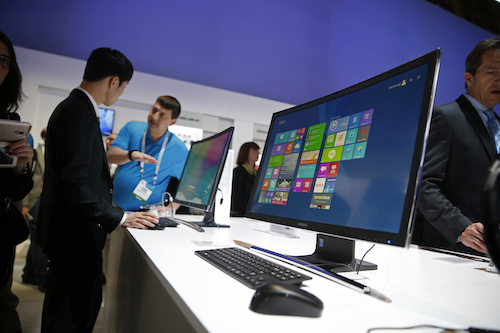 LAS VEGAS (AP) — A year ago, pundits were declaring the personal computer dead. Smartphones and tablets were cannibalizing sales, and the once-revolutionary PC seemed unnecessary — and boring.

Sure, a smartphone is great for checking emails, snapping photos and playing games. Tablets are perfect for watching videos and shopping online. But don't count the PC out just yet. Manufacturers are crafting high-resolution, curved screens for desktops and other new features you can't get in a hand-held device, while trying new laptop designs that mimic the tablet's appeal.

"For the last couple of years, mobile devices have been the hot commodity," acknowledges Dell executive Neil Hand. "But we're seeing a re-emergence of innovation in the PC space."

For years, PC innovation consisted mostly of putting faster processors or a bigger hard-drive inside the same basic box. That didn't really matter when the personal computer was a mostly unchallenged commodity. Global PC shipments peaked at more than 365 million units in 2011. But then sales fell off dramatically as tablets stole hearts and wallets. PC sales plunged 10 percent in 2013 alone, according to research firm Gartner Inc., marking the worst annual decline in the industry's history. They slipped a little further last year, to about 314 million units. PC makers say they understand the need to evolve, and at the annual gadget show International CES in Las Vegas this week are showing off many new features aimed at wooing back consumers.

Depth-sensing cameras, for example, are popping up in high-end desktops and laptops. Intel vice president Navin Shenoy said his company's "RealSense" camera can recognize its owner's face and unlock a PC without requiring a typed password. Intel is also promoting software that uses the camera in games that respond to a player's head or hand movements.

PC makers are borrowing ideas from tablets, with laptops that are increasingly thin and lightweight, with longer battery life. Dell's new XPS 13 notebook has a screen that extends nearly to the edge of the frame, like the screen on many tablets. By eliminating wider borders, Dell says it can fit a larger screen into a smaller frame.

Several companies have hybrid or convertible devices that resemble a tablet with a physical keyboard attached. Lenovo, the Chinese company that has become the world's biggest seller of PCs, is rolling out several new models of its Yoga hybrid, first introduced last year, with a keyboard that fully folds back so you can hold the display like a tablet.

Lenovo CEO Yang Yuanqing told The Associated Press in an interview that the new "convertible" hybrids will eventually replace the laptop computer for most people, because they are lighter and have longer battery life. "Now it's only a cost issue," he said. Many of the new hybrids are priced well above $500, while cheaper laptops are available. "We definitely should bring the cost down," he added.

ASUS on Monday announced a new series called the Transformer Book Chi, with lightweight keyboards that can detach completely by unsnapping a magnetic hinge.

"Our Chi is thinner than Air," quipped ASUS CEO Jonney Shih, boasting that at 1.65 centimeters, the Chi T300 is slimmer than a MacBook Air laptop. The Transformer uses efficient new Intel processors that don't require a cooling fan, which allows for a skinnier profile.

And manufacturers are experimenting with new shapes. Samsung is showing off a new all-in-one model, the ATIV One 7, with a slightly concaved, 27-inch screen that's designed to produce a more immersive experience for watching videos or playing games. Dell and HP are introducing new curved display monitors for desktops, too.

Of course, fancy features don't come cheap. Apple's new iMac, unveiled last fall, comes with a huge, ultra-high resolution, 27-inch Retina screen and equally big $2,500 price tag, for example. For about $1,900, you can control Hewlett-Packard's specialized machine Sprout with a touch-sensitive mat instead of a keyboard and use its sophisticated camera to scan physical objects and project the resulting image back onto the mat to incorporate into 3D printing designs.

"We don't think of it as a desktop. We think of it as a purely new category," said HP executive Ron Coughlin. Analysts say both the new iMac and the Sprout are probably best suited for artists and designers, but that some high-end features could find their way into mass-market PCs eventually.

To attract consumers at other price points, manufacturers are even trying different software: While Microsoft promises to release an improved version of its ubiquitous Windows operating system this summer, several leading PC makers are selling low-cost laptops that run Google's Chrome instead.

"The industry has to figure out how to cater to the different desires of individuals, and not treat them as one big, monolithic market," says Intel's Shenoy. "Those days are over."