Even as Boeing opened a large new propulsion plant in South Carolina on Wednesday, the aeronautics giant announced the facility has already been assigned additional work. 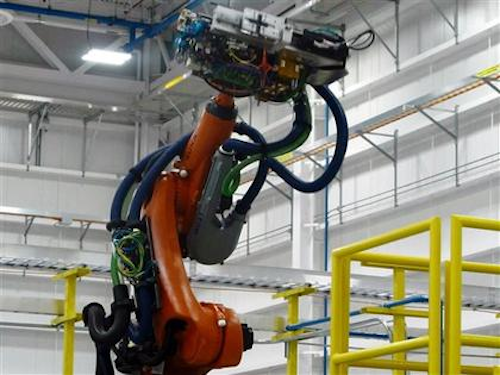 NORTH CHARLESTON, S.C. (AP) — Even as Boeing opened a large new propulsion plant in South Carolina on Wednesday, the aeronautics giant announced the facility has already been assigned additional work.
When Boeing broke ground on the 225,000-square-foot plant 15 months ago, it said it would manufacture jet engine air inlets for the 737 MAX, a new generation of Boeing's workhorse 737.
But as Gov. Nikki Haley joined company and local elected officials to cut the ribbon for the plant on Wednesday, additional projects were announced.
Nicole Piasecki, vice president and general manager of the Propulsion Systems Division of Boeing Commercial Airplanes, told a crowd of several hundred gathered in the cavernous building that Propulsion South Carolina would also design engine fan cowls for the 737 MAX as well as design air inlets for its new 777X.
"In this space in which we are in today we will house, in just the next several months, one of aerospace's most advanced automated manufacturing systems," she said.
In one corner of the building was a prototype of a robot that will be used to make the inlets. Propulsion South Carolina delivered its first intake to the engine development program at engine manufacturer General Electric last summer.
The Boeing propulsion plant will be fully operational by the end of the year.
Boeing did not say how many additional jobs are being added. But it said 7,500 people now work at Boeing facilities in South Carolina, up from 6,700 a year ago.
The new plant is just a few miles from the massive assembly plant where the company assembles its 787 Dreamliner.
The air inlets on the engine are important to both reducing drag on the airplane — thus saving fuel — and muffling the sound of the engine.
"Knowing how to design and build the inlets is crucial," said Charlie Hix, the director of Propulsion South Carolina. "It saves fuel and makes the airplane quieter so it's more environmentally friendly."
Haley, who opposes unions and has recorded radio ads opposing any attempt to unionize Boeing workers in the state, praised the company's workforce.
"You did this and South Carolina is forever grateful," she told the gathering, adding Boeing has shown it is grateful to the workers by bringing more work to South Carolina.
"I think whenever we have seen a good successful plant whether it's BMW or Michelin or any of the companies that come in the unions always want to take the opportunity they can to get in there," she told reporters later. "What we know is this work force is loyal. This work force is proud. This work force has made us what we are today."
Latest in Operations