Canadian prosecutors on Monday levied criminal charges against a now-defunct railroad company and six former employees over a 2013 explosion that killed 47 people in Quebec. 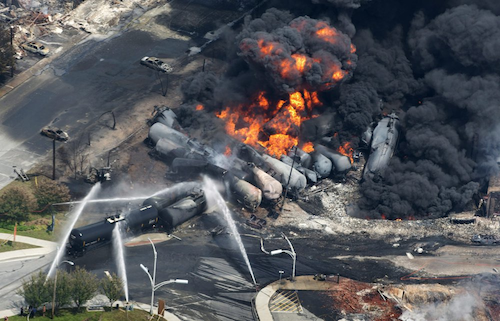 Canadian prosecutors on Monday levied criminal charges against a now-defunct railroad company and six former employees over a 2013 explosion that killed 47 people in Quebec.

Investigators previously determined that rail operators didn't sufficiently apply brakes to a train carrying 72 cars of highly combustible crude oil when it stopped for a shift change near Lac-Mégantic. The train's locomotive later caught fire and rolled into the town at high speeds in the early morning of July 6, then derailed and exploded.

Violations of that law could carry fines of $1 million for companies and $50,000 and six months in jail for individuals.

The railroad's former owner, Edward Burkhardt, was not among those charged on Monday.

Quebec courts, meanwhile, are also involved in the legal battle over a $430 million fund for victims of the disaster.

The explosion was Canada's worst rail disaster in modern times and exemplified the dangers of transporting highly volatile crude oil from fracking sites via railroad. Only about 6,000 people live in Lac-Mégantic, but crude is also shipped through highly populated urban corridors including Chicago and Seattle.

Officials from both Canada and the U.S. introduced new regulations for oil tanker cars earlier this year.