U.S. regulators have confirmed that an air bag made by Takata Corp. was involved in the April death of a woman in Louisiana , connecting the defective airbags to a seventh fatality. 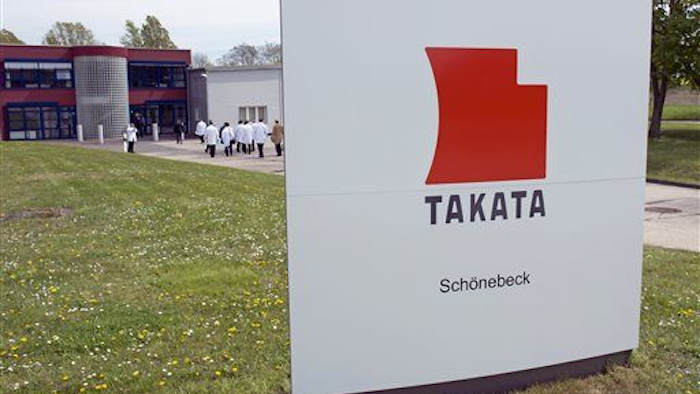 NEW YORK (AP) — U.S. regulators have confirmed that an airbag made by Takata Corp. was involved in the April death of a woman in Louisiana , connecting the defective air bags to a seventh fatality.

The National Highway Traffic Safety Administration said it examined the car Kylan Langlinais drove, read police and medical reports, and looked at other evidence. Takata said it had no comment. Honda, the maker of the car, confirmed that the airbag inflator ruptured during the crash.

Takata uses ammonium nitrate to make the small explosion that inflates the airbags, but in some cases the chemical burns too quickly and blows apart a metal canister designed to contain the blast, sending shrapnel toward passengers. Takata, the NHTSA and automakers are still trying to determine why it happens.

In addition to the seven deaths, the problem is linked to more than 100 injuries. Takata bowed to government pressure in May and declared many of the airbags defective, doubling a recall of the inflators to 33.8 million. That made it the largest auto recall in U.S. history. The recall includes cars and trucks made by 11 companies.

A 2005 Honda Accord driven by Langlinais crashed into a utility pole in Lafayette, Louisiana on the morning of April 5. Honda confirmed Friday that it sent a recall notice for the car three days before the crash. According to a lawsuit filed by Langlinais' family this week, that notice arrived two days after the crash. Langlinais died two days later.

The lawsuit says her right carotid artery was severed and that doctors didn't find any other injuries. No autopsy was performed.

Honda, Takata's largest customer and the maker of about 20 million of the affected cars, expressed its sympathies and said it is communicating with family representatives.