Takeaways From Fed Meeting: Expect A Rate Increase This Year

Many analysts foresee the first hike in September, though Fed Chair Janet Yellen has stressed that any increase will be driven by the latest economic data. 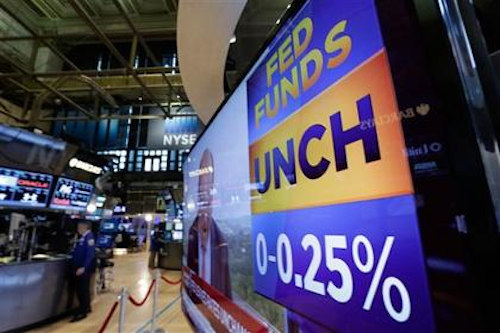 WASHINGTON (AP) — Expectations have grown that sometime this year, the Federal Reserve will raise interest rates from record lows. The only question seems to be when.

A statement the Fed issued Wednesday after ending its latest policy meeting provided no timetable. The central bank signaled that it wants to see further economic gains and higher inflation before raising rates.

Many analysts foresee the first hike in September, though Fed Chair Janet Yellen has stressed that any increase will be driven by the latest economic data.

Wednesday's statement noted that the job market, housing and consumer spending have all improved. The Fed still expects inflation to rise gradually toward its 2 percent target.

The statement made only slight changes to the wording of the previous statement in June. The few modifications suggested a healthier economy.

Michael Hanson, an economist at Bank of America Merrill Lynch, said the Fed's more upbeat language about the job market suggests that policymakers are nearing the point where they will raise rates. He expects that to occur in September.

"They haven't made up their minds, but ... we're getting that much closer to satisfying their criteria" for a rate hike, Hanson said.

Yellen has stressed that when the Fed begins to raise rates, it will do so only gradually. The idea is to avoid weakening an economy that's still benefiting from low borrowing rates resulting from the Fed's policies. She has suggested that raising rates in small increments, followed by pauses, will let the Fed assess the effects of slightly higher borrowing costs.

The Fed has kept its key short-term rate at a record low near zero since 2008. Once it raises it, other rates — for mortgages, auto loans and corporate borrowing — could rise, too.

"In my mind, the Fed is very comfortable with a slow, deliberate pace," said Brian Bethune, an economics professor at Tufts University in Boston. "The Fed doesn't want to upset the apple cart with any type of market shock that could cause further problems in the global economy, whether that is in China or in Europe."

Stock investors responded positively. The Dow Jones industrial average, which had been up modestly before the Fed's statement was released, closed up 121 points, or 0.7 percent.

The statement was approved on a 10-0 vote, marking the fifth straight time it has been unanimous.

Yellen has left little doubt that the Fed is preparing to raise short-term rates by year's end from the near-zero lows it set at the depths of the 2008 financial crisis. Earlier this month, she told Congress that she thought the economy not only can tolerate but needs higher rates.

The economy still faces an array of threats, from subpar U.S. manufacturing and business investment to troubles in Europe and Asia, which have roiled financial markets. Inflation also remains below the Fed's target rate.

And while the unemployment rate, at 5.3 percent, is nearly normal, other gauges of the job market remain less than healthy. Pay growth remains generally sluggish, for example, and many people are working part time because they can't find full-time jobs.

Although the September meeting, when Yellen is set to hold a news conference, is seen as the most likely time for a rate increase, some analysts think the Fed might wait until December.

During Yellen's testimony to Congress this month, some Democrats urged her to consider delaying a rate hike given that inflation remains below the Fed's 2 percent target. The Fed has typically raised rates when it perceives a need to prevent inflation from getting out of control.

Part of the slowdown in inflation, though, reflects a plunge in oil prices over the past year, which will reverse itself once energy prices rebound.

The Fed is closer to achieving its other main goal: Maximizing employment. The unemployment rate is at a seven-year low, and over the past three months, U.S. hiring has averaged a robust 221,000 a month.

Economists who think the Fed will act in September point not just to low unemployment but also to signs of strength in such areas as housing and consumer spending. There's also some concern that prolonged ultra-low rates may have begun to inflate dangerous bubbles in stocks, bonds or other assets.

Carl Tannenbaum, chief economist at Northern Trust, said the Fed kept Wednesday's statement "neutral" to preserve its options for the September meeting. This allows the policymakers to see how forthcoming events unfold, including two U.S. monthly jobs reports and economic turmoil in China and Greece.

"If we were hoping to see more of the Fed's cards, they held them very close to their vest," Tannenbaum said.