Gigafactory Gets Tesla Closer To Electric Car For Masses

To bring electric cars to the masses, Tesla Motors will transform an expanse of desert where pioneers passed on their way to the California Gold Rush and wild mustangs still roam the hillside. 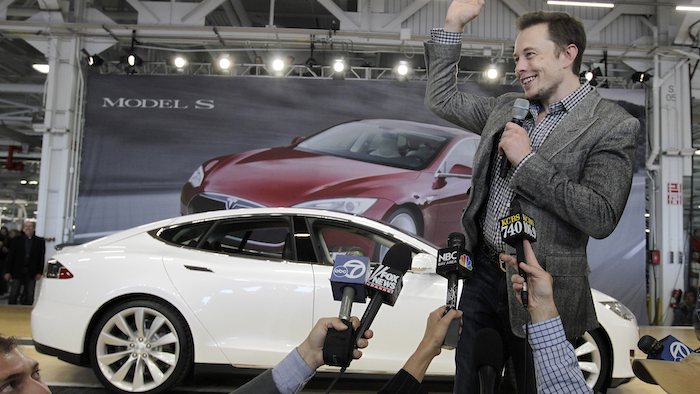 RENO, Nev. (AP) — To bring electric cars to the masses, Tesla Motors will transform an expanse of desert where pioneers passed on their way to the California Gold Rush and wild mustangs still roam the hillside.

This time, the rush will be in Nevada, which Tesla chose over four other states as the site for a $5 billion factory that the carmaker projects will crank out enough high-tech car batteries to power 500,000 vehicles annually by decade's end.

Nevada's elected leaders still must deliver on the economic incentives they've promised, but if they do as expected, Tesla will open its massive factory at an industrial park outside Reno, according to a person familiar with Tesla's plans. The person spoke on condition of anonymity because no official announcement had been made. An announcement was scheduled for Thursday afternoon at Nevada's Capitol.

A state synonymous with gambling hit the jobs jackpot — Tesla has said the factory will employ about 6,500 people. That's a welcome jolt for a tourism-based economy particularly hard hit during the Great Recession.

Tesla's choice of Nevada over California, Texas, Arizona and New Mexico takes it a big step closer to mass producing an electric car that costs around $35,000 and can go 200 miles on a single charge. That range is critical because it lets people take most daily trips without recharging, a major barrier to the widespread adoption of electric vehicles.

The "gigafactory," as Tesla calls the project, would bring the cost of batteries down by producing them on a huge scale. Its approximately 10 million square feet, equivalent to about 174 football fields, would be running by 2017. That is when Tesla hopes to introduce its Model 3,

At present, demand for electric vehicles is small.

Through August, automakers have sold just over 40,000 fully electric cars this year, up 35 percent from a year ago, according to the auto website Edmunds.com. Factoring in plug-in hybrids, electric vehicles still account for just 3.6 percent of all new car sales, a slight drop from last year. Still, government fuel economy standards that will require new cars and trucks to average 54.5 miles per gallon are expected to drive sales.

Nevada Gov. Brian Sandoval's office wouldn't comment Wednesday on the gigafactory news, saying only that he would make a "major economic development announcement" Thursday. A spokesman for Tesla Motors Inc., based in Palo Alto, California, said company representatives would be at the Capitol in Carson City for the announcement but offered no other details.

Sandoval has declined to discuss incentives he has offered Tesla. Based on CEO Elon Musk's public statements, the incentives likely total at least $500 million. The governor would have to call a special session of the Legislature to approve tax breaks, grants or other incentives of that magnitude.

This spring, Musk announced that the company would take the unusual step of spending millions to prepare sites in two states — or perhaps even three — before choosing a winner. The person familiar with Tesla's plans told The Associated Press a second site still will be prepared, in case Nevada is unable to deliver the incentives it has promised, or possibly to build a second factory.

Tesla has done excavation and other site-preparation work at the Tahoe Reno Industrial Center, where it plans to build the factory, but had not publicly committed to building in Nevada until it tested what economic incentives other states offered. The center is about 15 miles east of Sparks, a Reno suburb founded as a railroad town more than a century ago.

Aside from low tax rates and business-friendly workplace laws, Nevada offered plenty of sun and wind to generate "green" power. The industrial park is only about 200 miles along Interstate 80 from Tesla's lone auto assembly plant in the San Francisco Bay Area. It's also near a deposit of lithium, an essential element to produce the battery cells.

Competition for the factory has been intense among the states, which bid up their incentive packages in private negotiations with Tesla.

In California, where Tesla has its headquarters and manufacturing plant, the decision to build in the state next door stung.

"Tesla was using their business savviness to get states to compete against one another," said state Sen. Ted Gaines, R-Roseville, a principal proponent of the project. "It's just that I felt California had the inside track given our history of working in partnership with Tesla."

U.S. Worker Productivity Up In Q2

Tesla Boosts Turbocharged Stock With Plan for 5-For-1 Split