Was Microsoft Smart To Play It Safe With CEO Pick?

Tuesday's hiring of Nadella as Microsoft's CEO after a five-month search is a safe move that's likely to be greeted with sighs of relief around the company's Redmond, Wash. headquarters, industry analysts say. But the methodical, almost predictable decision is likely to reinforce perceptions that Microsoft Corp. is a plodding company reluctant to take risks as it competes against younger rivals who relish going out on a limb. 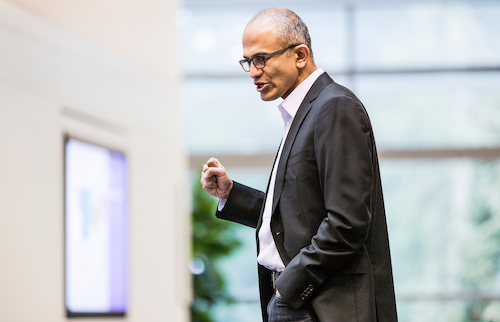 SAN FRANCISCO (AP) — After compiling a list of more than 100 CEO candidates, Microsoft settled on Satya Nadella a home-grown leader who joined the software maker in the early 1990s. That's back when Google's founders were teenagers and Facebook CEO Mark Zuckerberg was in elementary school.

Tuesday's hiring of Nadella as Microsoft's CEO after a five-month search is a safe move that's likely to be greeted with sighs of relief around the company's Redmond, Wash. headquarters, industry analysts say. But the methodical, almost predictable decision is likely to reinforce perceptions that Microsoft Corp. is a plodding company reluctant to take risks as it competes against younger rivals who relish going out on a limb.

While Google founder and CEO Larry Page boasts about his company taking "moon shots" and Zuckerberg promises to "move fast and break things," Microsoft has fallen behind the technological curve after underestimating the importance of Internet search more than a decade ago and reacting too slowly to the rise of mobile devices during the past seven years. Meanwhile, the sales of personal computers running on Microsoft's Windows software are shrinking.

Microsoft's malaise may have narrowed the field of up-and-coming visionaries interested in running a company founded in 1975.

"Going to work at Microsoft could make it look like you are going back to the dark ages," says Richard Metheny, a management coach for the executive search firm Witt/Kieffer in Chicago. "It's a well-entrenched business that has had trouble lately figuring out how to play in this new world."

Despite its challenges, Microsoft remains a moneymaking machine that sits atop an $84 billion cash pile. That alone should have been enough to tempt technological sharpshooters to take a shot at turning around the company, says Dennis Carrey, vice chairman of executive recruiting firm Korn Ferry and co-author of the book, "Boards That Lead."

Microsoft "is like a car that still has a full tank of gas, but it's just an old model," Carrey says. "There are a lot of great tech executives who yearn for that kind of challenge, especially with a bucket of cash to make acquisitions and do some really fun, cool stuff."

A Microsoft resurgence is entirely possible. IBM famously bounced back during the 1990s after hiring an outsider, former packaged food and financial services executive Louis Gerstner, to impose the most wrenching changes in that company's history.

Unsurprisingly, Microsoft described Nadella as the best person to intensify the company's focus on blending software and gadgets with cloud computing — a term broadly used to describe the concept of delivering applications and other services over the Internet.

Nadella, 46, wins praise from analysts and colleagues for his technical expertise, affability and deep knowledge of Microsoft's culture and disparate divisions. He has spent the last 22 years at the company, working in jobs that gave him insight into cloud computing, data centers, Internet search and video game consoles.

But Nadella also has a major handicap: He is a remnant of the same management team that led Microsoft astray during previous CEO Steve Ballmer's 14-year reign.

"As Microsoft continues down the right lane of the highway at 55 mph with its new CEO in hand, the fear among many investors is that other tech vendors from social, enterprise, mobile, and the tablet segments continue to easily speed by the company in the left lane of innovation and growth," FBR analyst Daniel Ives wrote in a Tuesday research note.

Microsoft's stock dipped 13 cents to close at $36.35 Tuesday after Nadella was anointed as CEO. The stock fell by more than 30 percent during the Ballmer era.

Given the stock's poor performance and the challenges facing the company, it probably would have made more sense for Microsoft's board to hire an outsider as CEO, says long-time technology analyst Patrick Moorhead.

John Thompson, the Microsoft board member who oversaw the CEO search, made it clear that the company did an exhaustive search. In a blog post late last year, Thompson disclosed that the board initially identified more than 100 prospects before whittling the field to about 20 people who are "all extremely impressive in their own right." With the search complete, Thompson is now replacing Gates as Microsoft's chairman.

But analysts and executive search specialists say Microsoft may have had difficulty winning over outsiders because of the specter of Gates and Ballmer, the previous CEOs who sculpted the company into what it is today.

Although he is relinquishing the chairman's role, Gates will remain on Microsoft's board along with Ballmer. The two men collectively own a roughly 8.5 percent stake in Microsoft, investments that could be used to amplify their voices even more.

The lingering presence of Gates and Ballmer could have prompted any outside CEO candidate to fear that new ideas might face resistance from an influential old guard, Metheny says.

Microsoft could have stolen a page from Yahoo's playbook when it raided the ranks of rival Google Inc. to hire Marissa Mayer as its CEO in 2012. That decision has mostly worked out for Yahoo, though the company still hasn't been able to boost its revenue under Mayer.

There was some speculation that Microsoft might be interested in hiring Sundar Pichai, a respected Google executive in charge of the company's Android and Chrome operating systems.

But it's likely that Microsoft would have had trouble persuading a Silicon Valley star to become its CEO. That's because much of Silicon Valley dismisses Microsoft's products as too complicated and expensive. There is also still a residue of resentment from the late 1990s when Microsoft's aggressive attempts to thwart the growth of Web browser pioneer Netscape Communications instigated an antitrust case, a suit filed by the U.S. Justice Department at the urging of a Silicon Valley coalition.

"When it came down to it, I don't think the Microsoft board could find the CEO that fit the profile it really wanted from outside the company," Moorhead says.

Once Microsoft decided to take the insider route, Nadella emerged as an obvious choice, Korn Ferry's Carey says. "Only history will tell us whether it was the right choice."