General Motors recalled a small number of Pontiac G6 midsize cars to fix a faulty brake light system in 2009, yet waited more than five years to call back over 2 million other cars with the same system, according to company documents filed with federal safety regulators. 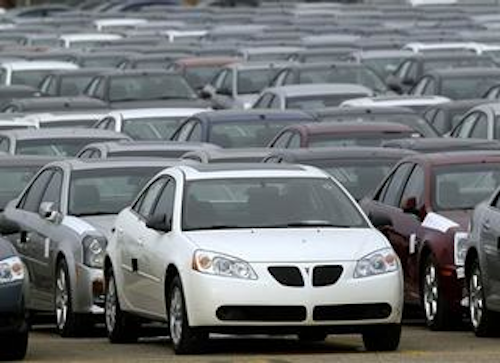 DETROIT (AP) -- General Motors recalled a small number of Pontiac G6 midsize cars to fix a faulty brake light system in 2009, yet waited more than five years to call back over 2 million other cars with the same system, according to company documents filed with federal safety regulators.

The documents, filed Thursday, show that GM recalled about 8,000 Pontiacs from the 2005 and 2006 model years because the brake lights might not work when the driver stepped on the brake pedal. But the company didn't recall later-model G6s or the Chevrolet Malibu and Saturn Aura until three weeks ago. The cars are nearly identical.

GM says the problem has caused 13 accidents and 2 injuries. GM thought the addition of a lubricant would fix the problem in newer cars, but it proved insufficient. Dealers were made aware of the problem, but car owners weren't told directly. As a result, a potential safety problem went uncorrected for years.

The company waited to recall the other cars until this year because the problem didn't happen as frequently as it did in the 2005 and 2006 G6 models, spokesman Alan Adler said. "We were monitoring these vehicles and looking to see what was happening with them all along," he said. "We made a decision that we thought was appropriate."

In addition, the National Highway Traffic Safety Administration didn't pressure GM to recall the newer cars. It even closed an investigation into the matter in 2009 after GM announced the initial G6 recall.

The company says it has changed its criteria for recalling cars. It now issues recalls based on the severity of a safety problem rather than the number of warranty claims or complaints, Adler said.

It's another example of how GM previously resisted recalling cars and trucks to fix safety problems.

The company is facing investigations from Congress and the Justice Department over why it waited at least a decade to recall about 2.6 million older small cars to fix an ignition switch problem. The company says that problem is linked to crashes that killed 13 people, but trial lawyers say the death toll is at least 60.

The problem can affect some of a car's other functions. If the cruise control is on, drivers may have to push harder on the brake pedal to get it to disengage, and the cars could be shifted out of "park" without the driver having a foot on the brake. Also, the cars' traction control, electronic stability control and panic braking assist features, all designed to prevent crashes or lessen their severity, could become disabled.

In total, the brake light recall covers 2.4 million G6, Malibu, Malibu Maxx and Aura models spanning model years 2004 through 2012, according to the documents.

GM has been checking into past safety issues and recalling cars with potential problems. The review has led to the recall of 13.8 million cars and trucks so far this year. That beats the full-year record of 10.75 million in 2004.