Addressing a key concern for manufacturers, President Donald Trump has instructed his administration to explore negotiations with California on achieving a single fuel economy standard for the nation during a meeting with auto industry executives. 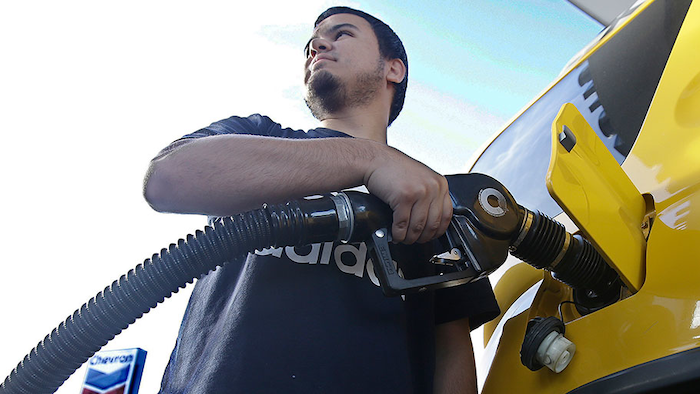 WASHINGTON (AP) — Addressing a key concern for manufacturers, President Donald Trump has instructed his administration to explore negotiations with California on achieving a single fuel economy standard for the nation during a meeting with auto industry executives.

The president met with top auto executives Friday to discuss the standards and tasked Transportation Secretary Elaine Chao and Environmental Protection Agency Administrator Scott Pruitt to handle the talks with California officials, according to two people briefed on the meeting. The people spoke on condition of anonymity to describe the private discussions.

The auto industry wants to relax the federal fuel economy standards, but not so much that they provoke a legal fight with California, which has power to impose its own stricter tailpipe pollution limits. Such a fight could create two different mileage standards in the U.S., forcing automakers to engineer and produce two versions of each of their vehicle models and driving up costs.

A Trump administration official said the two agencies have had meetings and discussions with California officials on the issue for several months.

Two auto industry trade groups confirmed in a statement that Trump was willing to talk with California, but they provided no specifics. The Alliance for Automotive Manufacturers and Global Automakers said they appreciated Trump's "openness to a discussion with California on an expedited basis."

During the meeting, one executive brought up how it would be better for the industry to have one standard instead of two, and Trump instructed Pruitt and Chao to go to California for talks, the people said.

The EPA under Trump has proposed freezing the standards at 2020 levels for the next five years, according to a draft of the proposal obtained by Sen. Tom Carper, D-Del. Under the proposal, the fleet of new vehicles would have to average roughly 30 miles per gallon in real-world driving, and that wouldn't change through at least 2025.

The EPA under Obama proposed standards that gradually would become tougher during that period, rising to 36 mpg in 2025, 10 mpg higher than the current requirement. California and automakers agreed to the rules in 2012, setting a single national fuel economy standard.

If California splits from the federal rule under consideration by the Trump administration, it likely would be joined by 12 states that follow its standards. Together they make up about 40 percent of U.S. new-vehicle sales.

Any big change by Trump certainly would bring lawsuits from environmental groups as well as California. Leaks about the Trump EPA plan already have provoked a suit from California and 16 other states.

In testimony to Congress this month, Mitch Bainwol, CEO of the manufacturers' alliance, said the trade group urged the administration to find a solution that increases mileage requirements from 2022 to 2025 and includes California to keep one national standard.

Trump said during the meeting in the Roosevelt Room of the White House that he wanted to discuss the "manufacturing of millions of more cars within the United States, for Michigan, for Ohio, for Pennsylvania" and states like South Carolina and North Carolina.

As the auto executives introduced themselves, the president joked to Sergio Marchionne, CEO of Fiat Chrysler, that "right now he's my favorite man in the room" because he's moving a plant from Mexico to Michigan.

Trump won the presidency in 2016 in part on his strength in the industrial Midwest states of Michigan and Ohio, which employ thousands of people in auto and parts manufacturing. The meeting came as the administration has been holding extensive negotiations with Mexico and Canada on a rewrite of the North American Free Trade Agreement, which the auto industry is watching warily.

Asked if the deal might adversely affect the industry, Trump said, "NAFTA has been a terrible deal, we're renegotiating it now, we'll see what happens."

Automakers have been lobbying the Trump administration to revisit the fuel economy requirements, saying they'll have trouble reaching them because people are buying bigger vehicles due to low gas prices.

When the single national standard was adopted six years ago, cars, which get better mileage than trucks and SUVs, made up just under half of U.S. new vehicle sales. By the end of last year, however, trucks and SUVs were close to two-thirds of all sales.

Some environmental groups oppose any reduction in the standards, saying that the ones developed in 2012 allow for changes in consumer buying habits. Reducing the standards, they say, will increase pollution and raise gasoline prices at the pump.

Requirements now are lower for bigger vehicles such as trucks and SUVs, said Luke Tonachel, director of clean vehicles for the Natural Resources Defense Council. "The standards automatically adjust to the sales mix of vehicles," he said.

Environmental groups also say the industry marketed trucks and SUVs to the public because they make bring higher profits than cars.