The feud between Toshiba Corp. and its U.S. joint-venture partner Western Digital over a planned sale of Toshiba's lucrative flash-memory unit is being aired at a Tokyo court. 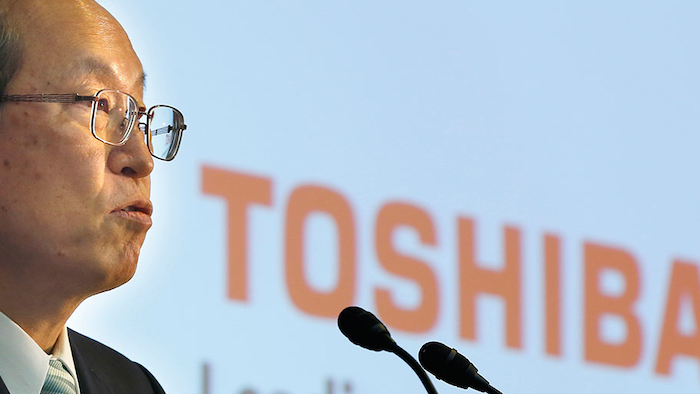 TOKYO (AP) — The feud between Toshiba Corp. and its U.S. joint-venture partner Western Digital over a planned sale of Toshiba's lucrative flash-memory unit is being aired at a Tokyo court.

At the first hearing of the case Wednesday, Toshiba's lawyers demanded 120 billion yen ($1.1 billion) in damages from Western Digital for allegedly interfering with its business and hurting its credibility as a company.

Western Digital's lawyers urged the court to throw Toshiba's case out, saying it has filed a competing claim with an arbitration court in San Francisco, where the same questions are being addressed.

The Tokyo District Court's ruling could determine whether or not the sale, needed to keep financially strapped Toshiba afloat, can proceed. Toshiba has been hobbled by losses at the U.S. nuclear operations of its subsidiary Westinghouse Electric Co., which filed for bankruptcy earlier this year.

Toshiba is hoping to close the deal by the end of next March.

In a somber courtroom, Yukio Nagasawa, one of six attorneys present who were representing Toshiba, questioned Western Digital's actions. He said the company had never joined the bid for the memory business, but instead tried to persuade banks not to give Toshiba financing and pressured potential bidders not to bid.

"There is no basis to say approval from Western Digital is needed to sell the shares," he told the court.

Nagasawa contended that the case should be heard in a Japanese court. He also said there was a risk Western Digital might disclose technological secrets, since it was so intent on blocking the sale.

Western Digital lawyer Takashi Sugawara argued the company's actions made sense and said the company had good reasons to oppose the sale.

The sale should be put on hold pending an arbitration ruling in San Francisco, he said.

Toshiba has been selling bits and pieces of its sprawling operations to deal with the towering costs at Westinghouse, partly due to a tightening of safety standards following the nuclear disaster in Fukushima, northeastern Japan. One of the main businesses Toshiba has kept is decommissioning reactors that went into meltdowns after the March 2011 tsunami.