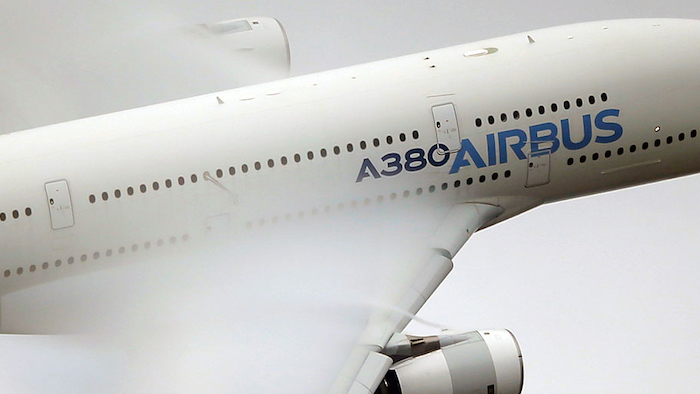 PARIS (AP) — Airbus scored a point in its high-stakes rivalry with Boeing by striking a deal just across the U.S. border.

The European plane maker reached an unusual, no-cost deal with Canada's Bombardier that sent Airbus shares up Tuesday, boosts both companies' prospects in Asia and should save thousands of Bombardier jobs from Quebec to Northern Ireland.

It could also help Bombardier avoid heavy U.S. duties that had helped push the Canadian company near bankruptcy. The announcement late Monday gives Airbus a majority stake in Bombardier's C-Series passenger jets, and some C-Series planes will now be built at an Airbus plant in Mobile, Alabama.

Boeing called it a questionable deal by two state-subsidized competitors.

It is a rare bright spot for Airbus, which is currently facing growing legal troubles stemming from corruption investigations in Britain, France and Austria. Airbus shares rose 2.8 percent in Tuesday in Paris before falling back slightly to 79 euros.

Airbus CEO Tom Enders sought to assure investors that the Bombardier deal will save money for both companies by combining supply chains and production. He argued that it will improve the appeal for C-Series jets, which have struggled for customers.

"This puts us in an excellent position ... with no cost, with no risk," Enders said of the deal. He added it will allow Airbus to expand activities in China and "strengthen our global industrial footprint."

While Airbus rejected a deal with Bombardier three years ago, Enders said Airbus is feeling more confident now in the C-Series jets and its own ability to take on another production line.

The move comes after the U.S. Commerce Department imposed harsh duties on Bombardier, accusing it of selling C-Series planes in America below cost and receiving government subsidies.

The Commerce Department announced it would impose an 80 percent duty on top of duties of nearly 220 percent. The case was a win for Boeing, which brought the complaint.

Airbus — in a long-running trade battle with Boeing — argues that the U.S. company receives illegal tax breaks that act like subsidies and hurt competition.

Officials and unions in Northern Ireland cautiously welcomed the Airbus-Bombardier deal. Bombardier employs more than 4,000 people at its Belfast factories and will deliver 125 new C Series jets to Delta Airlines next year.

Davy Thompson, regional officer of the Unite union, called it a "welcome development - one that gives breathing space to the C Series itself and which we anticipate should safeguard the future of C Series production jobs in Belfast for the foreseeable future."

However, Ross Murdoch of union GMB warned that "This deal is liable to further scrutiny from the U.S. administration that may see it as an attempt to dodge their trade tariffs. ... GMB hopes both Bombardier and Airbus have taken cast iron legal advice to ensure they don't get rid of one legal challenge only to open themselves up to another."

The Airbus acquisition will be subject to Canadian government review. Airbus will acquire a 50.01 percent interest in C Series Aircraft Limited Partnership, which manufactures and sells the plane. It will not pay anything for the stake, a recognition that the unit will see sales increase merely by virtue of being part of the Airbus group.

Bombardier will own 31 percent and the Quebec government's investment agency will hold 19 percent.

Airbus is not assuming any debt as part of the deal and it has an option to buy out Bombardier after 7 1/2 years and the Quebec government in 2023.

Rob Gillies in Toronto and Danica Kirka in London contributed to this report.

A recent incident has renewed calls to end drilling in coastal waters.
Oct 15th, 2021
Follow Us
Most Recent