At Toshiba's flash-memory chip plant in Yokkaichi, the orderly quiet of the clean room, with its metal boxes zipping around on overhead rails, contrasts sharply with the messy feud between its owners over plans to sell this prized asset. 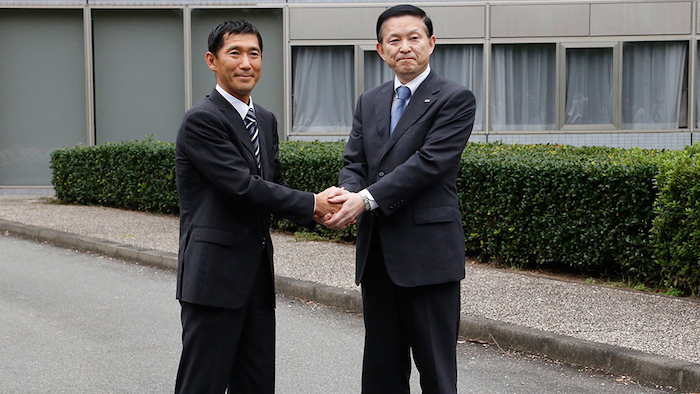 YOKKAICHI, Japan (AP) — At Toshiba's flash-memory chip plant in Yokkaichi, the orderly quiet of the clean room, with its metal boxes zipping around on overhead rails, contrasts sharply with the messy feud between its owners over plans to sell this prized asset.

Executives heading Toshiba Corp.'s memory business and Bain Capital Japan insisted Friday they will go ahead with the sale by March, if not earlier.

Toshiba Memory Chief Yasuo Naruke and Bain Japan chief Yuji Sugimoto led a media tour of the factory in Yokkaichi, an industrial hub in central Japan, where reporters were shown the site for planned construction of a new building to make state-of-the-art chips, called "3D." That plan will go ahead with or without Western Digital's consent or participation, they said.

The tour was clearly intended not only to highlight the plant's technological prowess but also to demonstrate the unity between Bain and Toshiba Memory.

To survive, Toshiba must part with the memory business, which it spun off in July as the last lucrative asset it has left to sell.

"Please check out how energetic we are at Yokkaichi," Naruke told reporters. He emphasized that new investments are planned for the plant.

Channels for talks with Western Digital remain open, he said. He said he hoped for cordial relations and continued cooperation with the company.

Western Digital has filed in U.S. arbitration court in San Francisco to block the sale. The litigation is likely to take years, but a decision is expected soon on whether the sale would be suspended pending resolution of the case.

Western Digital has especially objected to South Korean rival SK Hynix's involvement in the consortium buying Toshiba Memory. The consortium has said that intellectual property will not leak to Hynix, which is investing 395 billion yen ($3.5 billion) but doubts remain.

Western Digital, which also has a hard-disk drive business, said earlier this week that Bain has not contacted it and the two companies are not in talks. Bain declined comment on the denial.

The Bain-led consortium aims to list the NAND flash-memory SanDisk joint venture business on the Tokyo Stock Exchange within several years. Sugimoto has pledged to protect jobs at the memory business, keeping most of its management intact.

Competition from Samsung of South Korea, which is No. 1 in the memory chip field, is a major threat, and not falling behind in technology remains critical, he said.

Kota Ezawa, a financial analyst with Citigroup Global Markets in Tokyo, says selling the memory business is crucial for Toshiba, although it might have sought a better price. He also believes Western Digital might be bluffing to avoid losing control over the joint venture, protect its value and prevent damage to its own bottom line.

"What the arbitration court might decide is unknown," he said. "The memory operation is the only major asset Toshiba has left to sell and it needs the sale to avoid delisting."

Ezawa said the media tour Friday was likely intended to show that the Yokkaichi operation is largely run by Toshiba.

Bain's consortium includes Apple Inc., a major customer for the memory chips, and Dell Technologies Capital. The two U.S. investors will not acquire common stock or voting rights over the business.

Toshiba Memory also has been promised 600 billion yen ($5.3 billion) in financing from banks.